The Chairman of the Kanifing Municipal Council Disaster Management Committee, Musa Mendy has revealed that from January 2010 to date, his committee has recorded eleven fire incidents within the municipality.

He made this revelation last Tuesday during the presentation of food and non-food items to four fire victims in Tallinding and Jeshwang.

Mendy used the occasion to advise tenants and landlords to pay greater attention to candles, as most often fire incidents are caused by candlelight.

Mr. Mendy also commended all the institutions that have in one way or the other given assistance to the fire and flood victims in the KMC.

He urged the four beneficiaries to make the best use of the donated items, noting that although the materials are small, they will make some impact in their life.

For his part, the Executive Director of NDMA, Mr. Essa Khan called on the beneficiaries to utilise the donated items properly. He disclosed that his agency would work on a National Disaster Contingency Plan that would include networking between his agency, Governors, Alkalolu and communities on disaster whether natural or manmade.

He thanked the three donors for their timely intervention and promised that his agency would always support fire and flood victims in all the sixth administrative regions of the country, as stipulated in his agency’s national policy. 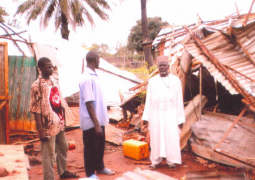