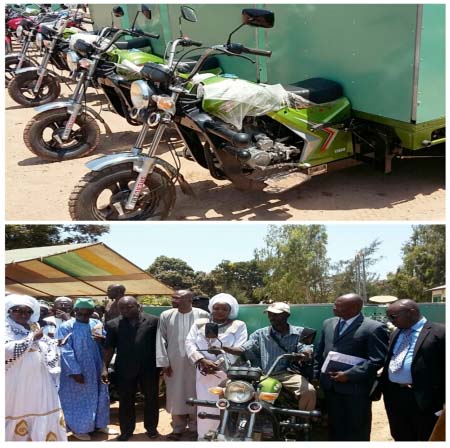 The 20 tricycles, costing a total of about D1 million, is to enhance the management of the estimated 300 tons of daily wastes generated within the Kanifing municipality.

Presiding over the launching ceremony, Pa Ousman Jarju, minister of environment, commended the efforts made by KMC in ensuring a clean municipality.

“Kanifing municipality is a champion in waste management and disposal under the leadership of Lord Mayor Yankuba Colley,” he said.

The minister also noted that KMC is the first council to come up with a waste management plan and as such, the Ministry of Environment will do everything to mobilise resources to fund the plan.

Lord Mayor Yankuba Colley of KMC said the council aims to make the municipality one of the cleanest not only in The Gambia but in the sub-region.

He said the procurement of the tricycles costing almost D1 million was sponsored by KMC.

He pointed out that the project is not only going to make the municipality clean, but also create employment opportunities for youth.

“These tricycles will be given to 20 young and able bodied men from the Kanifing municipality thereby creating employment,” he said.“The tricycles will be used to collect waste along the streets, especially where the big tractors cannot access.”

However, Mayor Colley called on people to change their attitude saying having waste collection equipment does not warrant anybody to be littering anywhere.

Lamin Sanneh, permanent secretary, Ministry of Lands and Regional Administration, said KMC has taken the lead in efforts towards the collection and management of waste in the country.