The KMC and BCC forum on HIV and AIDS recently ended at the Paradise Suites Hotel in Kololi.

The Secretary General at the Office of the President and Head of the Civil Service, Dr Njogu Bah, officially opened the partnership forum on behalf of the First Lady.

The forum organised under the leaderships of Mayor Yankuba Colley of the Kanifing Municipal Council and Mayor Samba Faal of Banjul City Council was aimed at mobilising resources for HIV and AIDS response in the two areas.

The forum was also aimed at bringing potential partner donors to share with them the national strategy of HIV and AIDS 2009-2014.

It seeks to find the necessary resources and funding gap on preventing HIV and AIDS in the Kanifing and municipalities.

Speaking on behalf of First Lady Madam Zeinab Yahya Jammeh, Njogu Bah, The Gambia’s secretary-general, said the one-day forum was very timely. “It is taking place at the time when our sub-region is experiencing an accelerated increase in HIV and Aids prevalence,” he says.

He added: “It is also happening at a time when the Government of The Gambia is vigorously championing partnership across the entire social spectrum in the fight against HIV and AIDS and related problems.”

According to Dr Bah, partnership forums are now among the top priority concerns of the world.

“HIV and AIDS is far the single biggest threat to our development and a big concern for our collective security,” he says.

He stressed that poverty, gender inequalities, drug abuse, denial and stigma and discrimination continue to affect those infected and affected by HIV and AIDS, thus serves as hindrance to an effective response to the HIV and Aids epidemic.

He added that the consequence of war and instability, which gives rise to refugees, returnees, displaced persons, and peace keeping, all increase the vulnerability of the population, the youth, women and children.

“Poor maintenance of human rights, particularly of people living with HIV and AIDS, contributes to denial, fear, stigma and discrimination and is inimical to the effective response to HIV and AIDS,” he says.

He added that the forum was aimed at creating a conductive environment to solicit the necessary funding.

For his part, Major Yankuba Colley said partnership is a crucial element in the realisation of policy objectives that are designed to address common purpose.

Despite the availability of some drugs, HIV and AIDS continue to claim the lives of many people in on a scale comparatively much higher than other parts of the world.

Alieu Jammeh, Director of the National Aids Secretariat (NAS), said some of the positive development mechanisms in the country about the disease include the establishment of National Aids Council, NAS, as well as regional and municipal Aids committees.

“HIV remains a public health problem, which remains high among our national development priority, and through a multi-secetoral approach all partners should be able to effectively mainstream and scale up HIV programmes in their respective constituencies,” says Jammeh. 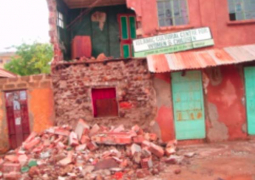