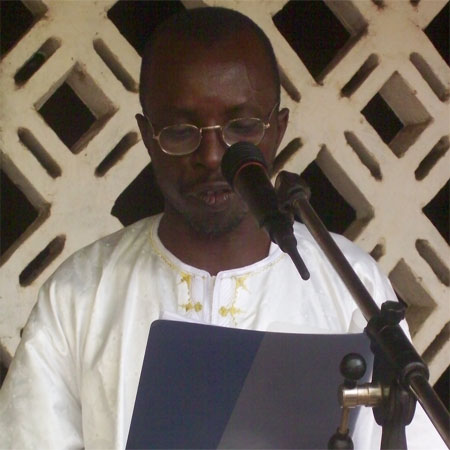 St. Martin's at Kartong has recently held their 2nd Speech and Prize Giving with the 4thbatch of students graduating from Grade 9. Though the school stands away from the city, it has challenged other Basic Cycle Schools in the country and have no fear to do so in the future if what thy cry for is provided to enhance their studies. The school cries for the basics other schools have at their disposal. The school has made an immense stride to put its name on the map as one of the best schools to belong to. The Principal, Pa Harry Badjie, who is praised by the school and the Kartong community and beyond, has put a lot in place in the school since he took over. He is praised as a silent but firm worker with lots of visions to improve the learning situation and improve the community in his own way. Augustine Kanjia delve into what he and the school have been into, their successes, needs and plans. Read on and tell others about 's.

The transformed school ('s Basic Cycle) gathered hundreds of visitors and citizens of Kartong to show how their children are doing their best to be counted. The school is a host to several schools who come to visit them and the area. Their hospitality has been rated as one of the best and many other schools have appreciated their gesture towards strangers.

Pa Harry Badjie remembers his conversation with the Catholic Education Secretary, Emil Kujabi when the task was given to him to head the school at Kartong then Emil Kujabi said to him; "Now prove yourself, here is the challenge." This statement has since been the motivating factor to his continuous stride to development in line with the Millennium goal. "Thank you Mr. Kujabi for this, it keeps making me strong every day," Pa Harry said.

Pa Harry Badjie addressing his fellow principals and those in the same profession said, "Life is full of opportunities which will be open to anyone to receive and merit, that they may begin to appreciate your innate worth and offer the same compassion and respect that you would give to others."

Compared to other far away schools, 's Basic Cycle recounted their achievements saying: Under him the school provided furniture, through Ingared School, Danish Gambian Friendship Association, World Bank, CCF. The school also in line with the principal's vision in 2002 in collaboration with his staff were able to get a staff quarter with the help of CES, AID, LINK, DFA Ireland. They secured solar electricity for teachers' quarters and classes for night studies, which is compulsory from Grades 7 to 9. The school's fencing project is still on course, yet to be completed. Renovation of three classroom blocks was done by SDF. Mr. Roche sponsorship has been able to sponsor 76 students while Alingsa's sponsoring 57 students.

"I am also delighted to announce that no sooner than later, more Solar panels will be mounted for 24 hours. I believe that Charging of mobiles, lights in staff houses and computer would be in full use soon. The Poultry house (project) is about to start and the building is ready. A new and well built toilet with a reserve tank is now on going and would be completed soon." He was happy to report that girls' enrollment is more than boys comparatively. In 2005/2007 boys numbered to 338 and girls were 352."

Talking on constraints, life does not go without such as many other schools would be too is engulfed with such and have been looking around for help and are still soliciting for such help to let them help others into higher heights. Many see the principal's move as helping not only the school but the society in which the school stands and he is bent on helping as such.

He says, "No matter how best you have or want to achieve your goals there are bound to be constraints or short comings. Some of which are: The lack of an equipped Home Science classroom for better results. We lack a computer laboratory to enable our students acquire computer skills, especially when we are expecting solar power. There is a very big need to have a Science laboratory, equipped to meet the needs of the children. We have provided Metal and Wood Work as subjects but there is no workshop formulated for that purpose. We need one to enhance a good practical knowledge to improve on their skills for a better future. We badly need to extend the solar light from Grades 1 to 4." Pa Harry Badjie stressed for some minor improvements which he said would be seen only when people come to visit the school and decide to give a help in hand especially citizens and those who passed through the school and are now in responsible positions and or are out of the country. "My development drive of the school must be shared with parents in one way or the other in the community," he said.

According to the hard working principal, the school registered some academic successes with the help of CES, REO, PTA who helped to create an ideal learning atmosphere for teachers and pupils. "With the lack of manpower resources and inadequate resources and many other problems my staff and I did not relent to let our children excel though we did not reach our desired goal but we are in the process of reaching it." He pointed out that the percentage passes in the years fluctuated. "In 2004/2005, we had 40% passes, (our first attempt), in 2005/2006 we had 45% passes and in 2006/2007, we had 61% passes. We keep progressing as years come and go," he said. Academic success he said is their priority and they would leave no stone unturned to reach their goal and "I ploy for your continued assistance."

Pa Harry Badjie says, "Before a baby walks he or she would have to place the hands on the knees of someone first then can stand and walk." He thanked all that have been helping the school in all capacity. He urged all philanthropists, citizens of Kartong to take the challenge and develop the school and their community. He thanked Modou Lamin Jarjou living in , a citizen of Kartong, commonly known as M, living in , who had helped the school when they badly needed help towards their Speech and Prize Giving ceremony. He asked those Gambians in the Diaspora to see reason to help a school willing to improve and to improve the society.

The Guest Speaker, Bai Matarr Drammeh resoundingly gave a flash back of the village and how schools were not many but with high corporation. "I gained admission abroad and went to study not as a "Bombster" but a learner. Life is not easy," he said.

Bai Matarr Drammeh, a native of Kartong and a highly educated man, said teachers teach everything but do not teach children how to find job. He said they would rather tell you all about how job can be acquired by "connection."

He advised that when finding a job one should first find out about the institution you want to be employed in. Try to know about the secretary and upon facing her ask about her family quoting names. She would direct you straight to the MD you are asking for. He further said that people should not just write, "Application for any vacant position," that it is wrong, "One should be specific," he said. He gave his experience on how he was taking newspapers from door to door in USA while he was studying and how his friend, Darboe had influenced him to leave the job and go for another. He thought packing books was heavy for him but Darboe convinced him and he stayed on. He said he told him a wanted a table and pen job, but it was not possible. In his boss absence they packed all books off as his master would do. The boss came back and was angry and said, why and how did you do that? After my explanation he gave me a table and chair to take charge of invoices. He cited his experience with his boss when he saw ghettos in a developed nation and said, "We owe it to ourselves to develop."

He further said he told his wife he wanted only 250 Dollars to return home to The Gambia and leave them there. And he made it through on his return. He talked about his successes ranging from the repairing of the beach through his construction company facilitating it, by a Deutch Company, the formation of Great Alliance Insurance, "For all I have done shows that there is nothing the human mind cannot do," he said. Including my being the president of the Gambia Chambers of Commerce, he said. Planning and discipline are vital for such and you should listen to your teachers. He thanked all present and praised Lamin Jamba Jammeh, the counselor of the area. Many invited guests and dignitaries were in attendance. To reach the school call: Tel: 00220 9701135/7783864

Prizes were given to the Nursery, Lower Basic and the , past and present students.