The final which was characterised by some brilliant exhibitions of individual brilliance has been an unfortunate final for the determined Jinack side that failed in their attempts to at least pull a goal back.

The best chance of the game for Jinack fell to Afamara Sonko, Momodou Sonko and Captain Ebrima Sonko, who missed a first half chance from a penalty spot following a world-class saved by Kanuma goalkeeper, Abdou Jarju.

Kanuma were awarded a giant trophy and a cash price of D3.000 as the champions, while the runners-up Jinack Kajata went home with D2.000.

The PRO of the tournament, Mambu Lamin Jammeh and the sponsor of the tournament, Kebba Saidykhan, both commended the people of the area for contributing towards the successful organisation of the championship.  They believed the tournament would go a very long way towards exposing the players to a more recognised and standard tournament.

Trio in Court for Stealing 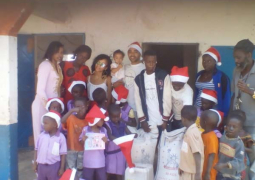