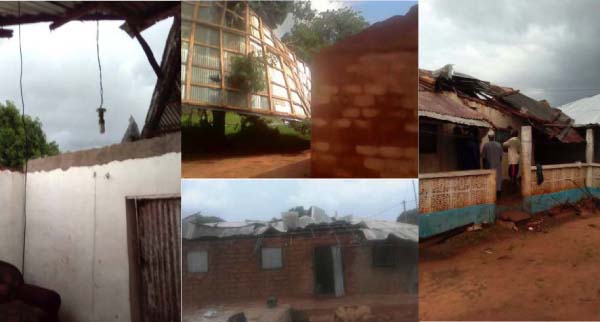 The pictures in this piece speak for themselves that residents of Jarra Kani-kunda village in the Lower River Region definitely need emergency assistance.

The villagers last night had their homes destroyed by a heavy downpour that had been accompanied by powerful wind. Roofs, corrugates and fence need either repairs or complete replacement.

The disaster, which followed a similar one in Bureng in Jarra East in early July, left many people shelter less in Kani-kunda.

The unexpected disaster struck at a time when farmers are busy ploughing their farms.

The disaster prompted Kani-kunda natives abroad to set up a Go Fund Me account, appealing for emergency assistance.

“This unfortunate situation has prompted us to put heads together in a bid to bail out our disaster-laden village,” said Alagie Bamboo Saidykhan, an executive member of Kani-kunda Kafoo in the United Kingdom.

He appealed for help from Samaritan, individuals, nongovernmental organisations and the government to “extend help to the people of Kani-kunda village whose normal business has been interrupted by a disaster.”

Those who want to help can do so through this link: https://www.gofundme.com/disaster-victims-of-kannikunda. Disaster victims would appreciate whatever assistance: cash or in kind.