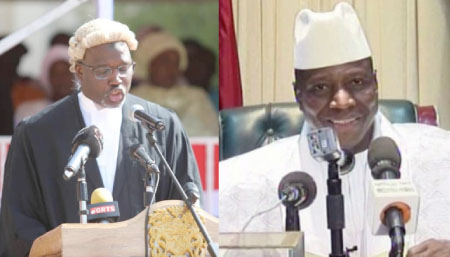 Abubacarr Tambadou, the attorney general and minister of Justice has made it clear that former President Yahya Jammeh will be immediately arrested and charged if he ever returns to the country.

“If former President Yahya Jammeh ever comes back to this country, he will face immediate arrest and charges of the most serious kind and no amount of irresponsible idle talk or political brinkmanship will prevent this from happening,” Mr. Tambadou warned.

“He will be subjected to an accountability process like any ordinary accused person in this country.”

Minister Tambadou was speaking on Sunday during the opening of the Legal Year 2020. “So, let me make this clear once again, the TRRC is only a fact finding investigative process, but unlike other truth commissions elsewhere around the world, ours is the first of its kind with a mandate to identify for prosecution those who bear the greatest responsibility for the human rights violations and abuses.”

After a year of public hearings, and as we enter into the second and possibly final year of hearings, he said, it can no longer be ruled out that crimes against humanity have been committed in The Gambia, between July 1994 and January 2017, under former President Yahya Jammeh, and that those who will be identified by the TRRC will face certain prosecution in the most serious form.

“There will be accountability of the highest order for these crimes and I assure the victims that it is now only a question of when, and not if. Make no mistake about it, barring any findings or recommendations of the TRRC to the contrary.”

According to him, no one can deny that there’s been a marked improvement in the judicial and legal sectors in the New Gambia. “Of course, there is still room for improvement and the government will be the first to acknowledge that but the fact remains that great progress has been made. Greater freedoms, especially in the area of freedom of expression and peaceful assembly are now a common feature of our new democracy.”

“There is no longer detention without trial and there has been significant reduction in reported cases of brutality or torture.”

“Institutions like The Gambia Police Force has now established a Human Rights Unit to receive complaints and provide prompt responses to reports of abuse and police brutality,” he disclosed, saying “effective civilian oversight mechanisms such as the National Assembly Select Committees or the National Human Rights Commission are now fully operational.

Our democracy, the minister added, is indeed taking a positive shape and “we should all be proud that only three years on from having one of the most repressive political environments in the world, our country is fast becoming a globally recognised free, open and democratic society.”

The establishment of the National Human Rights Commission, he added, and its numerous activities since then, underscores the significant advances this government has made in its governance reform agenda.

Recall: Rambo Jatta, the deputy leader of the opposition Alliance for Patriotic Reorientation and Construction (APRC) during his interview with BBC Focus on Africa said immediately arresting Jammeh will cause ‘bloodshed’ in the country, thus urging people not to even discuss about.

BIBLICAL REFLECTIONS: AND HE HEALED THEM ALL