God created Adam and put him in charge of the Garden of Eden with clear instructions as to what he could and could not do. “You are free to eat from any tree in the garden; but you must not eat from the tree of the knowledge of good and evil, for when you eat of it you will surely die.” (Genesis 2:17) God had created Adam for His own pleasure and not out of any express need or obligation. Afterwards He created Eve as a mate to Adam. The bond was so great that every day God would pay Adam and Eve a visit ‘in the cool of the day.’

Unfortunately, Satan succeeded in luring Eve into believing she could eat of the fruit without fearing the consequences. “You will not surely die, ….For God knows that when you eat of it your eyes will be opened, and you will be like God, knowing good and evil.” (Genesis 3:4-5) The relationship was broken when Eve and Adam ate of the fruit and they were sent out of the Garden.  Eve had dropped her guard for just a split second and that had led to the downfall of human beings. They became separated from God.

The Bible teaches that “… the wages of sin is death…” (Romans 6:23). Sending the couple out of the Garden was not God’s initial intention, but God is a just God; the penalty of sin had to be paid. It became evident that the couple could not pay the price of sin and God took a decision there and then that His Son who knows no sin would pay the price (in full) in their stead. God declared to the hearing of Satan who had disguised as a serpent; “I will put enmity between you and the woman, and between your offspring and hers; he will crush your head, and you will strike his heel.” (Genesis 3:15)

That statement marked a turning point in the history of humanity. God launched a redemption plan that involved sacrificing His one and only Son. He decided to put all at stake just so that sinful human beings would be liberated. Finally the plan was hatched when “the Word became flesh and dwelt among us.” (John 1:14)

God gave His Son to die in the place of human beings for a sin that He did not commit. We understand the significance of God’s boundless love for His creation by the selfless sacrifice Jesus made on the cross of on that fateful Friday as they nailed His hands and feet to the cross. None of Jesus’ arch’ enemies – the Pharisees, Sadducees - members of the Sanhedrin, had the wildest clue they were carrying out God’s plan of redemption for humanity when they crucified Jesus.

Our Lord Jesus had warned His disciples of His impending death. His accusers used this against Him to have Him convicted. “We heard him say, ‘I will destroy this man-made temple and in three days will build another, not made by man.” (Mark 14:58) Jesus was making reference to His death. He meant He was going to die of His own volition, but would rise again. “I lay down my life only to take it up again. No one takes it from me, but I lay it down of my own accord. I have authority to lay it down and authority to take it up again.” (John 10:17-18)

As the time approached for Him to be crucified, our Lord made His entry into where He would be arrested under false charges. However, the thought of dying exercised His mind. We hear Him pray; “Father the time has come. Glorify your Son that your Son may glorify you.” (John 17:1) The agony He had to go through was foremost in His thoughts. The prophet Isaiah had prophesied; “He was pierced for our transgressions, He was crushed for our iniquities. The punishment that brought us peace was upon Him…” (Isaiah 53:5)

He told His disciples; “My soul is overwhelmed with sorrow to the point of death. Stay her and keep watch with me.” (Matthew 26:38) Jesus is omniscient, that means He knows everything, nothing is hidden from Him. He could picture what He would have to go through in the hands of His enemies. That weighed heavy on His mind. He prayed for help from His Father. “My Father, if it is possible, may this cup be taken from me. Yet not as I will but as you will.” (Matthew 26:39)

God had the final say in this matter. But in these dying moments, as the pressure mounted, the anticipation of a gruesome and painful death weakened Him. “He took up our infirmities and carried our sorrows, yet we considered Him stricken by God, smitten by Him, and afflicted.” (Isaiah 53:4).

These were decisive moments on which depended the future of humanity as a whole. He had no choice but to pursue the course to the very end.  He realised that this stage in the process was a point of no return. He would rather that the will of the Almighty be fulfilled than His. He prayed a second time; “My Father, if it is not possible for this cup to be taken away unless I drink it, may your will be done.” (John 26:42) The will of the Father was paramount. There was no turning back.

He joined His disciples to find them sleeping, tired. He asked them; “Are you still sleeping and resting? Look, the hour is near, and the Son of Man is betrayed into the hands of sinners.” (Matthew 26:45) Decisive moments.

He added: “Rise, let us go! Here comes my betrayer!” (Matthew 26:45-46) God’s plan for our lives must be accomplished, whatever the cost.

May God the Almighty grant us the strength and courage to persevere to the very end with the assignments He has given us! 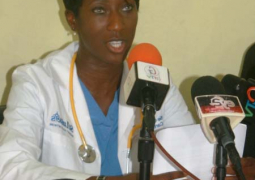