Faye Suso network and coordinator of Joint Undertaking in Community Education better known as JUICE has said his organization is committed to giving communities and local women life skills for them to become economically independent.

Mr. Suso made these remarks in an interview with this reporter during a day-long women’s training session on food processing held in Brufut community recently.

According to Suso, the JUICE project among its main objectives seeks to empower the disadvantaged strata of Gambian society, both socially and economically.

“The project seeks to support women and youths to attain sustainable means of livelihood through capacity building training opportunities, and other social development programs”, he added.

JUICE provides job opportunities for beneficiaries through the development of enterprise skills in the realization of their full potentials. The locals are involved in the entire process from needs identification, planning and implementation of activities, and such activities include sewing, knitting, arts and crafts among others.

Dilating on some of their key achievements since 2009, Mr. Suso said the project held summer classes for sixty children in Wellingara and its sister schools within the surroundings

Sunkary Badjie responsible for coordinating the Nyaften Kambeng Kafo soap making project, said JUICE has been working with the women group since 2009.

According to him, they have trained the group members on soap making, knitting, bag making among others.

To ensure sustainability of the project, the women’s group contributes 10% while JUICE bears the 90% commitment.

He noted that in early 2010, through a partnership with First Aid 4 Gambia, JUICE was able to facilitate the delivery of first courses to nursery school teachers and other community members in Wellingara and at Simma Vocational Training Centre. These were followed by refresher courses in 2011.

Taiwan should expand its role in Africa by strengthening cooperation and exchanges with civil society groups and nongovernmental organizations on the continent, according to two visiting U.S. scholars.

“This approach would create space for Taiwan in its engagement with Africa,” said Abiodun Williams, chairman of the Academic Council on the U.N. System, during a seminar at the ROC Ministry of Foreign Affairs in Taipei City.

The Canada-headquartered council is an academic institution working to stimulate, support and disseminate research and analysis on the U.N., multilateralism and international organization.

Williams, who delivered a presentation on mainland China’s increasing presence in Africa and the implications for Taiwan, was accompanied by J. Peter Pham, director of the Michael S. Ansari Africa Center at the Atlantic Council. Others attending the seminar included officials from the ROC Ministry of National Defense and Fisheries Agency.

According to Williams, Taiwan faces greater challenges in Africa today than the 1960s when it started dispatching agricultural technical missions to the continent.

Mainland China’s increasing economic and political engagement with Africa in recent years leaves little room for Taiwan to expand relations with nations that are not ROC diplomatic allies, he said.

Williams argued, however, that this can be an advantage and opportunity for Taiwan to cultivate ties with new partners by increasing mutual understanding through a beefed-up program of civil, business, charitable, NGO and religious exchanges.

“That can help build a reservoir of support, as well as good feelings and good relations, in these countries,” he said.

Echoing Williams’ remarks, Pham said in the long term, Taiwan should focus on increasing assistance to civil society groups in Africa, which have largely supplanted governments in meeting the needs of the people.

Since Beijing is not capable of engaging effectively on this level, Pham said, it leaves a great deal of room for Taiwan through such avenues as providing humanitarian aid.

As to strengthening relations between the ROC and its African allies—Burkina Faso, The Gambia, Sao Tome and Principe and Swaziland—Pham counseled leveraging strategic opportunities as they arise.

One example would be assisting Burkina Faso in managing the humanitarian crisis in Mali, which suffered a military coup March 22 over the government’s perceived weak response to a growing rebellion by Tuareg nomads in the northern part of the country. 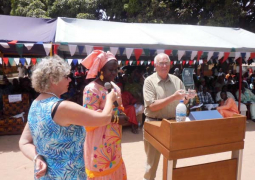