The treason trial involving the former Chief of Defence Staff, Lt. General Lang Tombong Tamba and seven others, at the high court in Banjul was adjourned to 5th July 2010, after hearing testimony by the accused persons, which ended on Monday.

DW8 told the court that he received an award as a "friend of the armed forces" from the President. His defence counsel, Hawa Sisay Sabally, applied to tender the medal as an exhibit, which was marked without any objections from the prosecution.

Counsel Sabally also showed DW8 a snap photograph of him with the Burundian President and President Jammeh during a football match held in The Gambia, which the witness recognised.

Subsequently, counsel HS Sabally also applied to tender the said photo as an exhibit, which was also admitted by the court without any objections from the DPP, Mr. Chenge.

Rambo further told the court that he has been sponsoring sporting events in the country, as a result of which he was awarded a certificate of appreciation, which was also tendered and marked as an exhibit.

At this juncture, HS Sabally applied to tender his bank statements as exhibits, which were all tendered and marked as exhibits without any objection from the prosecution.

DW8 told the court that, on 23rd November 2009, he was arrested and taken to the NIA headquarters, but was not told the reason for his arrest. At the NIA, he faced a panel of 16 security officers, adding that PW15, the head of the panel, had asked him whether he knew the reason for his arrest, and that he replied in the negative.
"I was again asked whether I know the first accused, and I said 'yes, he is my friend' ."

"I was again asked whether I had lunch with him at Kololi, and I said 'no he comes to me for lunch.? I told the panel that in February 2009, I went to his house in Bilijo, when his father passed away. I was in Lebanon and, upon my return, I went to his house to extend my condolences, but I did not meet him there.

"The panel asked me whether I gave any money to the 1st accused, and I replied 'yes, I gave him D3, 000 for the forty day charity at Sifoe.'

Rambo said another panel asked the boy the same question, but he instead mentioned that he had only seen me 'once', then everybody started to laugh.

He adduced that he was detained at the NIA for 22 days and, on 8th December 2009, he was asked to make a statement.

On 15th December 2009, he added, "the NIA Director General called me, and I went to his office, where the DG of NIA told me, I can be released on bail."

"My brother came, and bailed me and I was released and went home. I was not charged. I requested for my passport, but they refused," he further revealed.

On 1st February 2010, he went on, "the DG of NIA called me on my mobile phone, and said 'Rambo you have good news, you can come and take your passport, you can travel now.'  I went to the DG of NIA and collected my passport, and the DG of NIA told me that he was apologising on behalf of the panel, the NIA and H.E. the President for my long detention, and asked me to take it in good faith."

He added: "I told them that 'May God help you to know the truth,' and the DG of NIA responded: 'we know the truth and that's why we are giving you your passport.' I then collected my passport, and left."

On 2nd February 2010, he continued, "I was called by the DG of NIA to return the passport."

He said PW15 then told him that they were very sorry, as according to him, the Director of Public Prosecutions had asked them to bring the passport back.

"On 10th February 2010, I was called to the NIA office and upon arrival, I was escorted to the office of the Director of Public Prosecutions.

"The DPP told me that I was involved in a coup plot, and he told me the serious nature of the charge. He asked me whether I know Ebrima, and I said 'no'."

Rambo went further to tell the court that the DPP had told him that if he wanted him to help him, he should give him information about the coup plot.

"I told the DPP that this was my first time hearing about a coupplot. I was at the NIA, but I did not know why I was there," he added.

On 18th March 2010, he added, "the Daily Observer carried an article of a story about treason and my name was there. On that day, I was called to the NIA where I was given a bundle of papers to sign, which happened to be an indictment.

"I spent one day at the NIA, and the following day I was brought to court," Rambo revealed. "I have never conspired with any of the accused persons," he told the court.

As for his relationship with the 4th accused, he said:

"I don't know him; I used to see him at state functions."

About the 3rd accused, he adduced: "I met him when we were invited at the Army Officers Mess at Kotu. He was then the DG of NIA, and had seen my car, that he was interested to buy for his office."

"The 1st accused was my friend, since 1995, when he was the State Guard Commander. I used to go to State House, where I met him and he used to come to my house to have lunch, and we used to play football together. I called the 1st accused several times on his mobile phone for lunch and playing football."

Rambo told the court that he is not interested in politics, but noted that he knows the APRC party, and has been supporting them.

Rambo was later cross-examined by the DPP.

The case was then adjourned to 5th July 2010 for adoption of the addresses. 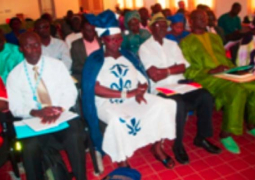