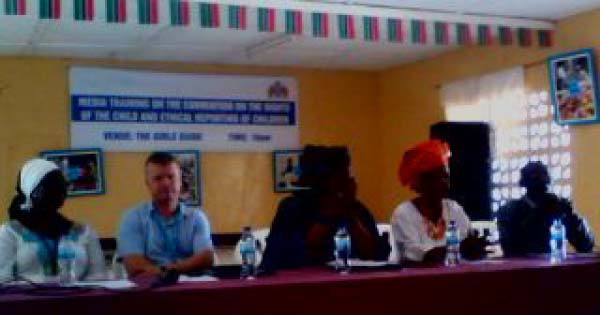 The Department of Information Services Tuesday organised a daylong training for journalists on reporting and showcasing images of children at risk and the United Nations Convention on the Rights of the Child (UNCRC), held at the Girls Guide School hall on MDI Road.

Speaking at the opening, Nancy Nyang, permanent secretary at the Ministry of Information and Communication Infrastructure, said the workshop was organized through the media support advocacy programme which is a component under the Gambia Government-UNICEF-funded country programme 2012 to 2016, and implemented by the Department of Information Services.

She said the programme aimed to involve journalists in the national advocacy efforts to create visibility through the media on the situation of women and children in The Gambia.

PS Nyang said the media support to advocacy component seeks to strengthen the capacity of media practitioners to effectively disseminate progress, achievements, and gaps relating to child rights, protection and the equity agenda.

She added that UNICEF was among government’s main donors, catering for children by promoting and protecting their lives at national, regional and village based-level.

She said UNICEF is committed to ensuring special protection for the most disadvantaged children, victims of war, disasters, extreme poverty, all forms of violence and exploitation and those with disabilities.

The role of the media practitioners in the implementation of the media support to advocacy component could not be overemphasized because the media is a powerful tool in supporting advocacy efforts for children and women by creating a strong programme visibility focusing on the achievements and the remaining gaps, she added.

Ruterp Lethtom, representing UNICEF, said the training was important because it would ensure that the rights and integrity of all children continue to be protected as they are talked about in the media.

He said it would further increase the understanding of why the UN convention on the right of the child was significant in forwarding a conducive environment for all children everywhere in the world through the media reporting.

He added that the training was timely because this year marked the 25th anniversary of the UNCRC and is deemed “the year of innovations for equity”.

This year’s anniversary, the governments, civil society, religious and youth organizations, as well as the media are challenged to think differently about how to promote and achieve change for the most vulnerable children who are also hardest to reach using an equity approach for the inclusion of all children, he said.

“The CRC, which provides UNICEF’s mandate, is an innovation in promoting the welfare and protection of children everywhere,” Lethtom said.

He added that in ratifying the UNCRC, countries around the world including The Gambia made a promise to children everywhere that every girl and boy should have a name and identity that they should have the right to survive and be healthy, right to education and that no child should be subjected to violence.