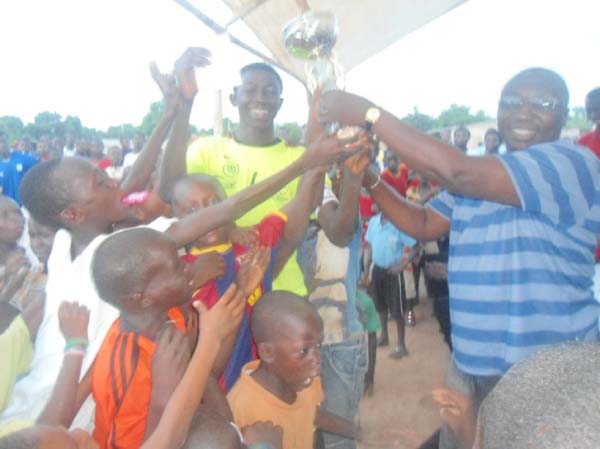 Jatta’s Memorial Football Academy of Lamin celebrated their first Lamin Nooran title after they came from a 1- goal down to enjoy an illustrious 3-2 penalty shootout win to deny Young Biko their 2nd consecutive championship title in an energetic final at the Late Sanna Jatta Memorial Football field in Lamin on Sunday.

Both teams went into the weekend’s encounter on the back of impressive performances in the build-up to the tough final and the brilliant demonstration of some fantastic teamwork coupled with some individual brilliance saw the travelling Young Biko fans celebrate the opening goal of what proved to be a lively final.

It took the reigning champions (Young Biko) only 16 minutes to make their championship ambition known when star player Ousman Manneh hammered home a close range strike thanks to a terrible goalkeeping error by JMFA young gloves man Tijan Dumbuya, much to the dissatisfaction of his coach.

Young Biko continued to dictate the pace of the game in the better part of what appeared to be an exciting final but all their brilliant attacking options and the first half dominance in the middle could only cause them an equaliser as JMFA responded fruitfully, courtesy of Saraney Colley’s solo effort.

The impressive substitute Saraney Colley took maximum advantage of a perfect release by teammate Sulayman Jarju in the 57th minute of a see-saw encounter that saw JMFA Academy lift this year’s Lamin Nooran trophy with a huge financial reward of D7,000

Young Biko, who felt disappointed for missing out in the battle for the top accolade, also walked away with a cash prize of D5,000 as runners-up.

There were individual prizes for the tournament’s most outstanding player and the golden boot winners.

Lanky forward Ebrima Suso, who finished as the tournament’s leading goal-scorer, was rewarded for his magnificent scoring ability as he bagged the golden boot after netting six goals in the campaign.

The other individual prize was awarded to Young Biko’s inspirational forward Ousman Manneh, who was crowned the most outstanding player of the tournament. He received a cash prize of D500.

JMFA made their first appearance in Lamin Nooran in 2009 but failed in their first attempt to win the title after suffering from a group stage exit.

They resumed their quest for the championship glory in 2010 but could not manage to reach the final having been eliminated by Young Biko of Bakau in the semi-final thanks to a 2-nil score-line.

They however succeeded in laying their hands on the silverware after their weekend’s win over Young Biko in the final.

However it is not the same success story to be said about Young Biko this year, but if their impressive performance in last year’s campaign is anything to go by, the Bakau outfit has every reason to be proud of their achievements in the championship the last time around.

The Young Biko side, who are the feeder team to the Bakau giant killers Steve Biko, became the winners of the last Nooran trophy.

The team, under the guidance of coach Sainey Jarju, is undeniably the most successful team in the history of the competition having managed to reach three finals for the third time in succession since making their debut in 2009.