Ms Toshiko ABE was accompanied to the office of the vice president by Japan’s ambassador to The Gambia, Hiroshi Fukada, who was also at the seat of the presidency to bid farewell to the vice president after the end of his four-year tour of duty.

The Japanese envoy told waiting reporters after her audience with the vice president that her meeting with vice president Njie-Saidy provided an opportunity to extend the gratitude of Japan Prime Minister to President Yahya Jammeh for his participation in the Tokyo International Conference on African Development (TICAD) in June this year.

According to her, her discussion with the vice president also centered on how to further strengthen the ties between Banjul and Tokyo.

She also told reporters that she was at State House to extend thanks to the Gambian leader because Jammeh is supporting Japan’s hosting of the Olympic Games in 2020. 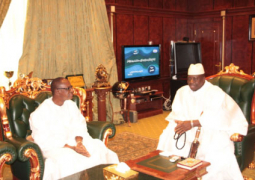