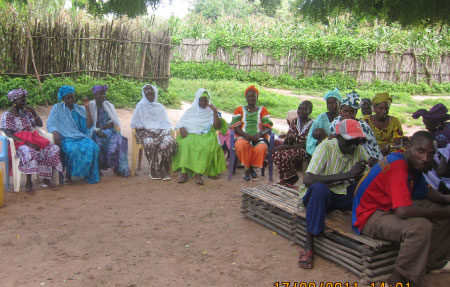 The sensitization session was held at Bayaba village in Sami district of the Central River Region north, and was organized by the Nova Scotia Gambia Association (NSGA).

It was funded by Global Fund in partnership with Catholic Relief Services (CRS), and attracted both women and youth in the community.

Speaking at the meeting, Mamadi Jarju, NSGA regional coordinator for Central River Region, underscored the significance of the training course.

According to him, the NSGA is committed to enlightening school children and the general public on killer diseases such as HIV/AIDS and malaria.

“This project – a Global Fund project - is focusing purely on malaria, and we are trying to pass the message about malaria, and what it is all, on how malaria is contracted, as well as its treatment and possible prevention methods,” he said.

Mr Jarju called on participants to be ambassadors of the NSGA in spreading the gospel on malaria to the grassroots people in order to reduce malaria cases at that level.

The lead facilitator further described malaria as a life-threatening disease caused by the plasmodium parasite that is spread by the female anopheles mosquito in humans.

According to Jarju, malaria kills one million people each year of whom 90% are from Africa, and those at highest risk are children under-five and pregnant women.

He noted that malaria signs and symptoms develop between 7 to 21 days after a bite by the female anopheles mosquito, which carries the parasite.

“It is through a blood test that it can be confirmed that this particular patient is suffering from malaria, and the treatment prescribed by the health personnel must be followed correctly,” he said.

NSGA’s regional coordinator went further to state that the malaria disease has been in existence for years, and even though people are being sensitized on the subject of malaria, it continues to claim lives of innocent children in the country.

He called on the participants to advocate for attitudinal change towards using preventive methods.

“The most effective preventive malaria method is sleeping under a treated insecticide net,” he said.

Mrs Sarjo Jallow the head of the kafo commended NSGA and its partners for their strategic support in the fight against malaria to save the lives of innocent children and people.

She added that her kafo has been in existence for the past seven years with the objective to complement the government efforts at the grassroots level in fostering national development.

Muhammad Touray, a youth activist, spoke on behalf of the participants, and said they would do their best to ensure the message is spread across the community.