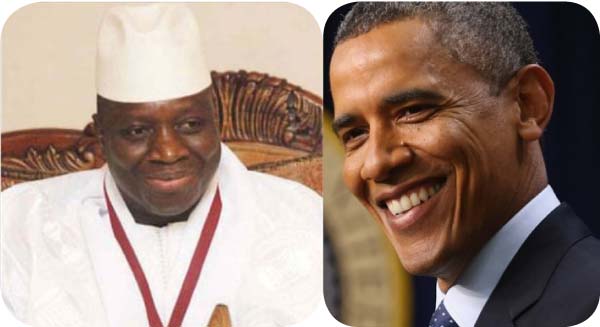 President Yahya Jammeh is among the African heads of state and government in a list of those invited by U.S. President Barack Obama to the United States-Africa Leaders Summit in Washington, D.C. on 5 and 6 August 2014.

According to the latest reports on the upcoming international conference, after their country’s re-admission by the African Union, the new leaders of Egypt and Guinea Bissau will now join the 47 leaders (among them the Gambian leader) initially invited by Obama to the two-day summit.

The countries not invited are reported to be CAR, Eritrea, Sudan, Western Sahara and Zimbabwe.

“The White House is pleased to announce that the United States will host the first U.S.-Africa Leaders Summit in Washington, DC on August 5 and 6, 2014”, the office of the White House Press Secretary announced in a statement issued in January 2014.

It added: “President Obama looks forward to welcoming leaders from across the African continent to the nation’s capital to further strengthen ties with one of the world’s most dynamic and fastest-growing regions.

“The summit will build on the progress made since the President’s trip to Africa last summer, advance the Administration’s focus on trade and investment in Africa, and highlight America’s commitment to Africa’s security, its democratic development, and its people”.

According to the United States Department of State Bureau of African Affairs on U.S.-Africa foreign policy, only countries in sub-Saharan and North Africa who are ‘in good standing’ with the United States and are not suspended by the African Union have been invited to the summit.

The theme of the Leaders Summit is ‘Investing in the Next Generation’.

It is expected that the Summit will bring together leaders from across the African continent with the US leadership in a move that seeks to further strengthen ties between the regions.

The Summit also seeks to advance the focus on trade and investment in Africa, and highlight America’s commitment to Africa’s security, its democratic development, and elevate the ideas of young people. U.S.-Africa Summit Schedule of Events includes the following:

On August 4 a Civil Society Forum; followed by meetings on Investing in Women, Peace, and Prosperity;Investing in Health: Investing in Africa’s Future; Resilience and Food Security in ChangingClimate; and, Combating Wildlife Trafficking

On August 5 there is a U.S.-Africa Business Leaders Forum hosted by Bloomberg Philanthropies and the U.S. Department of Commerce.

Then in the evening is the White House Dinner on the Occasion of the U.S.– Africa Leaders Summit.

On August 6 the U.S.-Africa Leaders Summit proper gets under way with the first session in the morning – Session 1 on Investing in Africa’s Future.

A Family Photo for the heads of delegation will follow at 12 noon, before the start of Session 2 on Peace and Regional Stability. Session 3 is on Governing for the Next Generation.

The Summit will end at 17:00 hrs with President Obama’s Press Conference

Also on August 6 is the “Spousal Summit”. This will start in the morning, when first lady Michelle Obama, in partnership with former first lady Laura Bush and the Bush Institute, will host a spouses symposium at the Kennedy Center focused on the impact of investments in education, health and public-private partnerships.