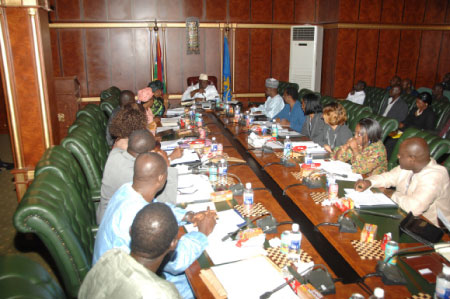 President Yahya Jammeh on Wednesday held a meeting with stakeholders and members of the National Food Security and Disaster Management Council at State House in Banjul.

The daylong meeting, attended by the Vice President and Minister for Women’s Affairs, cabinet ministers as well representatives of UNICEF and the Food and Agriculture Organisation (FAO), was among others geared towards discussing issues such as challenges, progress made and the way forward in relation to disaster, agriculture, livestock, water and sanitation, health, shelter and infrastructure.

“All of us should work together to ensure food security. Let us concentrate more on disaster prevention than the cure. How we enhance prevention is to encourage farmers as much as possible,’ President Jammeh told the meeting, adding that “the way forward is not for us to meet every time and strategise as to what to do if something happens”.

Noting that his approach would be with regard to food security, President Jammeh said this is the time to talk about disaster before it happens, and how to go about it, and ensure that we provide seeds and input for farmers, to grow what they need to eat and to advise them to grow early crops that they can quickly harvest before anything happens.

According to him, disaster strikes when we have never thought it would happen and so it comes at a time when not the least expected.

‘All the interventions over the years, like I always tell the Cabinet, we have to find a long-term solution to these problems. We don’t have to be responding all the time and wait for what next is coming. In every emergency there can be efforts to prevent it, but in the event that prevention fails, we should prepare in advance a response that would effectively nullify any negative impact the disaster may have,’ he stated.

Commenting about school farms, President Jammeh said: “If any school produces up to ten bags of rice as school effort, we will give that school 20 bags, and if you produce five bags we give you ten in addition to what you have. That would encourage agriculture in all the schools. They should be responsible for their own feeding, but when they sit and you provide them with everything they would not see the need.’

On the dependency syndrome, the Gambian leader said most African countries count on external support.

“We don’t have a contingency plan per se, we wait for a disaster and count on the benevolence of the international community to come and fix the problem, which is wrong. We should take charge of our own countries and the destiny of our people,’ he said, while urging farmers to always be keeping seeds in preparation for the next planting season.

Further noting that there are teething problems in agriculture, President Jammeh added that most of the crops produced by women in this country are highly perishable, “so agro-processing is one thing that we really need to sustain and make sure that there is a sustainable food security in this country”.

The Vice President underscored the council’s preparedness to help farmers have a successful cropping season.

Other cabinet members including Solomon Owens, the Minister of Agriculture, Francis Liti Mboge, Minister of Works, Fatou Lamin Faye, Minister of Basic and Secondary Education and Abdou Kolley, Minister of Finance all welcomed the convening of the meeting.

Dr Babagana Ahmadu, the FAO country representative in The Gambia, spoke about the implementation of the programme on the control of contagious bovine cattle disease..

“So far the response is very impressive. The farmers are very happy and full of praise for all the actors concerned in the exercise,” he further remarked, adding that the exercise will be completed in a month’s time.

Victoria Ginja, the World Food Programme country resident representative, informed the meeting that their main focus of intervention currently in The Gambia is in the school feeding programme.

“We are working in close collaboration with the Ministry of Basic and Secondary Education. We are covering approximately one hundred thousand school children. The current project that is ongoing started in 2012 and will end in 2016,’ she stated.

Aichatou Diawara Flambat, Unicef country representative to The Gambia, said UNICEF had put in place a mechanism to treat about 3200 children for a period of six months and these number of children that were suffering from severe and acute malnutrition were admitted and most of them have recovered now.”

“We have been supporting the Ministry of Agriculture and the Department of Planning together with FAO and WFP on the national agriculture sample survey and national agriculture census. We have also in the recent past supported some women organisations on environmental protection and mangrove regeneration, and now we are working with them on marketing and packaging,’ Izumi Morota-Alakija, the UNDP resident representative, said.

According to her, they are also working on the early warning phase 2 project which is targeting the Global Environment Fund.