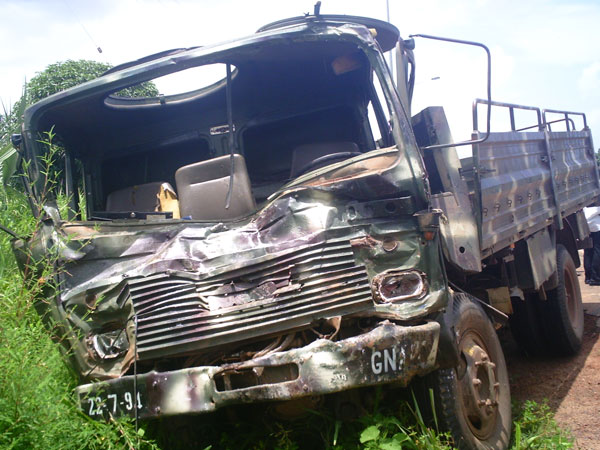 At least five people have been confirmed dead and several others wounded in a fatal car accident when a military truck collided with a 32-passenger 'Gele Gele' along the Kombo Coastal road yesterday.

The victims, according to reports gathered, included one soldier Private Abba Sanyang and four civilians whose names could not be ascertained at the time of going to press.

The incident is said to have happened around 10'o clock in the morning when the Gele Gele with registration number BJL 3809 A coming from Brikama collided with the Military-truck GNA 101 heading towards Brikama.

According to eyewitnesses, the accident happened when the two vehicles rammed into each other, killing five people on the spot. An unconfirmed number of people who were said to be onboard the vehicles are reported to be in critical condition.

It could be recalled that earlier this year in a road accident between the villages of Serrekundanding and Kembujeh in Kombo East District of Western Region ten people were killed, eight of whom died on the spot when a truck veered into a crowd of APRC supporters forming part of a campaign trail.