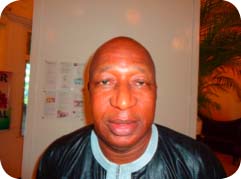 The Sierra Leone Ambassador to The Gambia, Alhaji Soulayman Daramy, has commended the Gambian leader President Yahya Jammeh for being an African icon with a clean heart for humanity.

The open day was to accord institutions the opportunity to showcase the relevance and impact volunteerism contributes to the development process in The Gambia and the world.

Responding to the question of the Ebola outbreak in the sub-region, particularly in Sierra Leone, which recently received the substantial financial support of the Gambian President, Ambassador Daramy described President Jammeh as a natural man who behaves naturally as a result of his clean heart for humanity.

According to the ambassador, President Jammeh realised that Sierra Leone is in crisis of an Ebola viral disease, and with such positive and sympathetic consideration he decided to do whatever it takes in his power to help Sierra Leoneans.

He commended President Jammeh for his kind and timely intervention, for being the first President to give substantial support to Sierra Leoneans in their fight against the deadly Ebola.

He also described the Gambian leader as a brother who has a clean heart for humanity, with a kind gesture which many African leaders should endeavour to emulate.

The Sierra Leonean chief diplomat thanked President Jammeh for opening the doors for other international donors to support Sierra Leone.

“We are very grateful to President Jammeh,” he said.

The ambassador also seized the opportunity to thank the Gambian leader for insisting at the recent UN General Assembly that proper attention must be paid to these kinds of calamitous diseases and crisis situations in their countries.

He said that whenever he is in the streets of The Gambia nobody knows whether he is a Gambian or Sierra Leonean, which makes him feel very happy and delighted, and shows the hospitality of The Gambian people.

Speaking during the United Nations Volunteers (UNV) Open Day, the Sierra Leonean top diplomat said the day was to accord institutions the opportunity to showcase the relevance and impact volunteerism contributes to the development process in The Gambia and the world.

He buttressed the importance attached to UNV Open Day, noting that organising this day for partner institutions was key as they are partners in development.

According to the Sierra Leonean chief diplomat, any person who engaged in volunteerism of his or her service for the good of mankind is something that is commendable. He encouraged people to assist in the sphere of development in the world.

Asked about his advice to Sierra Leoneans residing in The Gambia, the ambassador said he is very happy with the way Sierra Leoneans living in the country comport themselves.

“I would not condone anybody absolutely who goes against the rules and regulations laid down by the Gambian authorities,” he added.

Ambassador Daramy also urged Sierra Leoneans to redouble their spirit and endeavour to respect the rules and regulations of the country laid by the Government of The Gambia.