At a ceremony held at State House, the Gambian leader also handed over a Trust Bank book for the new Cabinet Credit Union to the Vice President, Isatou Njie-Saidy.

Speaking on the occasion, President Yahya Jammeh said the move was in line with his pledge for Cabinet to have a credit union like any other institution.

He told cabinet ministers that for the purpose of the Cabinet credit union, they will together with the Vice President work out mechanisms where each and every one of them can contribute monthly to the credit union.

For any credit union to survive, when you borrow, you must pay; if you borrow without paying the credit union will be dead,” he said, adding that sometimes unexpected occurrences can happen in cabinet where they need to put up together to assist one person or more.

Because of the lack of such funds, he added, it is difficult for members to contribute meaningfully.

"So I think with these funds, we will be able to take care of any eventuality comfortably without any hardship,” Jammeh stated.

He also told cabinet ministers that even if they are dismissed at any time, they will be given back whatever they contributed.

"So we are not taking anybody’s money,” he added.

"Because it is a credit union, if you leave, whatever you have not used will be given back to you, if you so wish; but you can also still be a member of the Cabinet Credit Union (CCU). Because, once you are a member, you are always a member, whether you are out of the cabinet or not,” he emphasized.

"We as a cabinet, we as a nation, are proud of you for your leadership, for your benevolence, for caring and sharing; because whatever you have, you share it with others. We have seen that in this country in many ways,” she stated.

Other speakers including the ministers of Justice and of Petroleum, Lamin Jobarteh and Teneng Ba Jaiteh respectively, all lauded President Jammeh for the gesture. 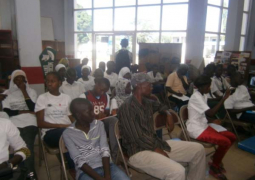