Ibrahim Bun Sanneh, Karamo Bojang, the former deputy at the agency, Ousman Sanneh, the agency’s former commissioner of operations, Seedou Bojang, the agency’s accountant, and one Marie Sanneh, were indicted by state prosecutors under a 30-count charge.

Continuing his defence Bun said: “Instructed my operational commander, Ousman Sanneh, to stay with our officers at the NIA while the investigation was being conducted against Lamin Kabou and Lamin Sima to witness it.”

He said when Ousman Sanneh, the third accused, returned from the NIA, he came to his office in the presence of his senior management team and told him that the NIA had no-case against their officers.

Bun added that when the former IGP, Ensa Badjie, came to his office, he informed him about what happened and Ensa Badjie told him that he would inform the Interior Minister about it.

DW3 further adduced that, to his surprise, nothing was done and their personnel were taken to court.

Still testifying, he told the court that Alieu Jassey, the exhibits keeper and the custodian of all the keys of hard drug,s never reported to the authorities of the NDEA that there was a theft at the exhibits store, adding that he could not remember any case of missing drugs.

Testifying further, Bun told the court that Alieu Samba was a vendor who was referred to him by Ensa Badjie, because Ensa was aware that the NDEA was badly in need of handcuffs.

He said for five years NDEA did not have a handcuff and, whenever they needed handcuff, they would go to Ensa Badjie to lend handcuffs, because sometimes officers on the ground were attacked by the offenders.

“I contracted Alieu Samba to supply 300 handcuffs to the NDEA and I instructed the accountant, Seedou Bojang, to pay Mr Samba D350, 000,” Bun told the court in his defence.

He added that before the items arrived, he was arrested and taken to the NIA and, while at the NIA, he saw Mr Samba being brought in. 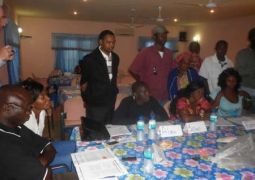