Jamano FC were last Saturday crowned Babylon nawettan champions after beating DHQ camp in the final of the tournament.

Both teams fought really hard to go home with the cup as well as a flash screen TV and satellite channel as hundreds of football fans gathered at the Babelon football field to cheer them.

Jamano FC scored the only goal of the game through Kassi Conteh who was awarded a flash screen TV which was handed over to him by the CEO of Star GSM mobile company.

During the second half of the game, DHQ dominated Jamano FC but despite their efforts they could not find the back of the net thus Jamano FC emerged winning.

As champions, Jamano FC went home with a trophy and a cash amount of D10,000.

Meanwhile, after the match, the laying of the foundation stone of the football field fence was inaugurated by Hon. Sakouba Jarju, National Assembly member for Busumbala Constituency, CEO of Star GSM Lamin Kaba as well as the communities of Lamin and Babylon.

Speaking after the laying of the foundation stone, Hon. Sakouba Jarju, law maker for Busumbala said he was very much impressed by what he saw.

He congratulated Jamano FC for the victory and described the laying of the foundation stone for the football field as a step in the right direction.

“This shows that the youths of this community are ready to promote sport”, he said.

Lamin Kaba, CEO of Star GSM Company said he made a promise to Babylon Sports Committee that whoever scored the first goal during the final will be given a flash screen TV with a satellite as part of his support to sport in the country. 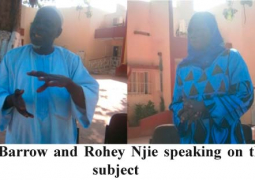