Justice Wowo and Lamin A.M.S. Jobarteh were arraigned on a 13-count indictment which included abuse of office, conspiracy to defeat Justice and interference with witnesses, offences relating to Judicial proceeding, to giving false information to a public officer, charges they denied.

In his defence testimony, Jobarteh, who is already serving a two-year jail term, told the court that he lives at Old Yundum, and was the former Attorney General and Minister of Justice, adding that he was jointly charged with Justice Joseph Wowo, in count 3, which he denied.

He denied ever conspiring with Wowo to defeat justice, stating that he was saying the truth because he had sworn to the Quran.

Jobarteh, who was being led by his defence counsel, BS Touray, admitted knowing one Bernd George, but said he had never ever interfered with the witnesses during the course of the trial at the Brikama High Court, and the negotiation for compensation which was held in his house after the delivery of the judgment by the Brikama High Court.

He further pointed out that Alieu Barry was not arraigned and the judgment was delivered in his favour, noting that it was not a crime to arrange for a settlement, because even when he was a sitting judge, he always encouraged such settlement.

He added that he did not speak to Barry more so to invite him to the meeting, adding that Barry was not alone at the meeting; he was there with his lawyer and his nephew.

He said he did not force Barry to sign any document, because there was no document to sign, and that as AG, he could not interfere with the judgment.

“In fact, where did I get that power to alter the judgment?” he asked.

“Where did I get the power to force Alieu Barry to succumb? I am already aware that he has settled with two or three parties before our meeting,” Jobarteh stated.

Jobarteh further added that at the meeting after all the introductions, an offer was made by the judgment debtor, and he believed that Mr Barry made a counter proposal which was accepted.

Alieu Barry himself suggested that he would get in touch with his attorney, which never happened and there was no final decision and he supposed that Mr Barry said his attorney’s decision was final, he added.

He also told the court that there is a traditional joking relationship between mandinkas and fulas, and it was on account of that he made certain remarks, and had no intention to force Alieu Barry.

He added that settlement of matters are not limited to the level of the High Court, and immediately after the meeting, Alieu Barry did not complain to any authority.

The former Justice minister further told the court that he did not make a statement that would have a prejudicial effect and, moreover, the matter was not before any court of appeal, and even if it was before the Court of Appeal, there was nothing wrong with negotiation.

“That is why the law provided for consent terms,” he stated, adding that if that meeting was unlawful, it would not be held in his house, and Chuck and Mene would not be exempted from prosecution.

He said that negotiation for settlement was encouraged both by the bench and the counsel in order to save time and resources, and that was why, in a criminal case, the accused could plead guilty so as to have leniency, emphasizing that the said case was not before any court of appeal.

Jobarteh said even if all of them at the meeting were all in a right frame of mind not to make irresponsible comments, the comment made at the meeting was made having attended and after the entry of the judgment in the case, and that was not a defeat of justice.

That meeting was not capable of altering the position of the parties, he said, adducing further that he had never obstructed any proceeding before the Court of Appeal.

“There is no reason for the two of them to conspire, and his intention at the meeting was to settle the parties.”

Justice Jobarteh also told the court that it is not proper to join different offences in one count, and that man who drafted it should go back to law school.

He denied that he and the 1st accused person had a prior discussion of the meeting.

The former AG also stated that as far as he was concern, the charges pressed against him are a set up, and that anybody who knows the law would not prefer charges against somebody whose desire was to do justice.

Under cross-examination by the state counsel, Legenju Vitalisn, Jobareh told the court that he was at the meeting with Mene, Wowo, Andrew, Alieu Barry, and Chucka.

In response, the prosecution urged the court to admit it in evidence as an exhibit on the grounds of relevance.

However, the trial judge overruled, and rejected the statement.

The case continues on 9 January 2014, for adoption of briefs. 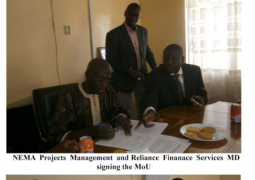