David Fulton, a British national who is currently serving his prison term is appealing against the conviction and sentence, at the Banjul High Court before Justice Joseph Wowo.

Mr. Fulton was on 30 March 2009 convicted and sentenced by the Banjul Magistrates' Court for forgery, to three years in prison following his own plea of guilty.

The particulars of the offence indicated that David Fulton sometime in the year 2007 and 2008 in the city of Banjul, and at diverse places in The Gambia, without authority and with intent to defraud or deceive, forged a Technical Assistance registration number plate GSC 1 TA, and thereby committed an offence.

Lamin Camara, Counsel for the appellant told the court that he had filed a motion before the court, dated 29 May 2009. He said he was not sure whether the state respondent was served with the motion.

State Counsel Marley Wood, who was served in the court, said she needed time to study and respond to the appellant's motion. 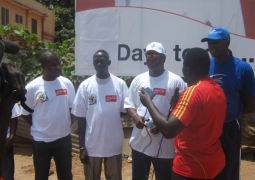