Interior has got off to a perfect start to the 2009\10 National Women League Division One season as they comfortably enjoyed a humiliating 4-nil win over bitter rivals Company Ten, at the Real De Banjul football field on Friday under the watchful eyes of Interior Minister, Ousman Sonko.

Saribna Colley opened the scoring mid-way through the first period as she capitalised on a sloppy defending by Company Ten to drill home a clever strike, the first goal of the campaign.

Company Ten were made to paid the price for failing to capitalise on numerous scoring opportunities as they fell 4-nil behind, courtesy of goals from Mama Saidykhan, Isha Saidykhan and Awa Demba, who was crowned the leading scorer in the Female Division One League Championship last season.

The win saw them set up an early pace at the top of the table at least for now.

Elsewhere on Saturday, Abuko United and Red Scorpion entertained each other to a bitterly fought goalless draw at Real De Banjul playing ground. The last game in the Week One fixtures will be played between promoted Armed Forces and Division One escapee Kinteh's United at the same field.

The National Women League Division One, which kicked-off on Saturday saw City Girls succumbed to a disappointing 1-nil defeat to Makasutu, who were relegated to the second tier female football after a strings of dismal performances in the Female First Division last season. 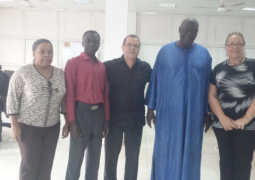