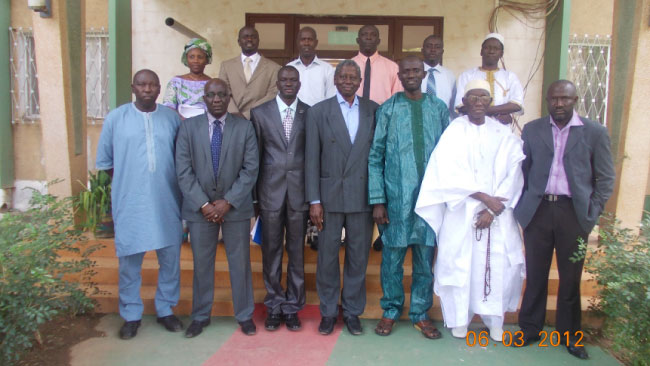 The minster of Youth and Sports Alieu K. Jammeh yesterday inaugurated the Gambia Football Association (GFA) Normalisation Committee at the ministry at the Quadrangle in .

The committee which has been instituted following the ministry’s dissolution of the former executive committee of the GFA has been given six weeks to complete the task assigned to them.

Sports minister Jammeh in his inaugural statement said their main objective is to strengthen football, pointing out that sport is not driven by a personal agenda.

He said the GFA normalization committee as part of its terms of reference will review the Gambia Football Association’s Constitution with a view to amending and aligning it with the FIFA accepted one, and organize a general meeting to sensitise stakeholders on the changes being made at the helm of affairs of the GFA.

The committee is also supposed to pave the way for the staging of a national congress to elect new officials who are transparent, efficient and competent in running the country’s football association.

It will also help to re-organised the GFA league, as well as investigate the reasons behind the non-delivery of trophies and cash prizes to league winners for the past years.

Headed by the GFA’s honorary life president Alhaji Ousman B. Conateh, the 14-member committee was named after last Friday’s dissolution of the executive of the football association, for what officials said was government’s lack of confidence in the executive committee of the GFA headed by Kinteh.

Alhaji Omar Sey, former GFA president, is the vice chairman of the interim committee, while businessman Salifu Jaiteh, a former GFA second vice president, are among the committee members.

In his speech, the chairman of the committee, Alhagie OB Conateh, said members of the committee will serve diligently, and shall perform in the best interest of Gambian population.

“I thank the minister for his confidence in us, and through you we want to inform HE President Jammeh that we will do the job as expected,” he added.

pointed out that the government is the chief patron of football, and anybody who is not accepting this is making a big mistake.

“All hands should be on deck, and be involved in the re-mobilization of football in the country,” he declared.

“By choosing us you have sent a clear signal of your intent. Each one of us has one time served the GFA, and it is part of making things better. We are highly honoured to be associated with the committee.”

He added: “Football is run by a partnership all around the world. It is the biggest sport worldwide, and it needs experts to run it.