The treason trial involving the former Chief of Defence Staff Lt. General Lang Tombong Tamba and seven others continued yesterday 28th April 2010 with the testimonies of the lead investigator and three officials of the GSM companies, Gamcel, Comuim and Qcell.

The lead investigator, designated as the prosecution's fifteenth witness (PW15), whose name was not disclosed due to security reasons, told the court that: "It happened on the 19th November 2009. One Ebrima Bojang was arrested at Farafenni Military Camp in the North Bank Region, and brought to the National Intelligence Agency (NIA) headquarters."

"According to one Lt. Colonel Yerro Jallow, Commanding Officer at Farafenni Camp, one Ebrima was caught spying security installations like 'sangas' - these are security stations or points were security routine goes in and out.

He said that on the 21st of November, Ebrima was invited by the panel to shed light on the issue, adding that during questioning, he (Ebrima) informed the panel that he lied to the authorities at Farafenni. He added that Ebrima told the panel that he was sent to Farafenni Barracks to spy by the former Chief of Defence Staff, Lt. General Lang Tombong Tamba, and the former Deputy Inspector General of Police, Modou Gaye.

He further adduced that Ebrima went further to state that apart from Ngorr Secka, the 6th accused person, all the accused persons attended a series of meetings at the residence of Lang Tombong Tamba.

He said Ebrima told the panel that the purpose of the meetings was to overthrow the democratically-elected government of Yayha Jammeh. He said this statement was corroborated by Rui Jabbi Kassama during investigations.

The witness said, according to Ebrima he knew the former CDS when he was in active service, and that he visited him at his Kololi residence.

“We effected the arrest of the suspects except Ngorr Secka," he told the court.

Still testifying, he informed the court that "after the arrest of the accused persons, they were interrogated and cautionary statements were obtained from them and a case file was prepared."  He added that during investigation, they learnt of the arrest and detention of Rui Jabbi Kassama in Guinea Bissau.

"The accused persons were confronted with Ebrima and they denied knowing about the coup, and said they had nothing to do with Rui Jabbi Gassama. During their interrogation at the NIA, the 6th accused was not arrested. The contact numbers of the suspects were taken, including witnesses, and their contact numbers were short-listed by me. I wrote them and at the end I signed, including the witnesses," he stated.

The DPP rose and asked the witness whether he can recognise the list of numbers, and he replied 'Yes'. The DPP subsequently applied to tender the said list of numbers as an exhibit, which was marked as exhibit P23 without any objection from the defence team.

The witness continued, informing the court that Ebrima insisted that he was sent by the former CDS, Lang Tombong Tamba, and the former deputy IGP Modou Gaye.

"Based on this information, on the 15th of December 2009, I was selected to be part of the team of investigators that went to .  Because when Ebrima was arrested in Farafenni, he stated that he was to meet with one Rui Jabbi Gassama and two other persons, who were sent by Kukio Samba Sanyang, at the border."

PW15 also told the court that "according to intelligence, Kukoi is presently residing at Thies in Senegal and is still engaged on planning a coup to overthrow the democratically elected government of The Gambia together with Gambian dissidents and mercenaries from the sub region, notably Liberia where Kukoi was a close aide to the former President of Liberia, Charles Taylor."

"On our arrival at Guinea Bissau on the 16th of December 2009, we visited our embassy where we were accompanied by one Lieutenant Colonel Sano and Mr. Suwa, the Financial Attaché at the Gambian Embassy in Guinea Bissau, and we met Rui Jabbi Kassama at a detention centre in ."

According to PW15, Rui Jabbi confirmed to them that he brought the copy from the , when he visited The Gambia.

At that juncture, the DPP again applied to tender the said copy of the Daily Observer newspaper as an exhibit. It was shown to the witness which the witness identified, saying it includes the pictures of Lang Tombong Tamba, BO Badjie, 3rd 4th 5th and one Yankuba Drammeh.

The copy of the Daily Observer was marked by the trial judge Justice Amandi as exhibit P24 without any objection from the defence team.

PW15 further said that Rui Jabbi Kassama (PW2) was interrogated, and said he once received a call from one Assan, working at the Gambian Embassy in Bissau, and that the said caller requested for an appointment at Samaritan Restaurant in Bissau.

He said, according to Rui Jabbi Kassama, he charged the said Assan 14,000 Euros for a kilo of cocaine and Assan built confidence in him.

Senior defence counsel PC Secka rose and objected to the statement made by the witness, noting that what the witness is saying had already been said by Rui Kassama himself, during his testimony. As he put it, "we cannot have a witness in this court repeat what others said."

DPP Chenge intervened, and said that the witness was saying the role he played.

PW15 continued, and told the court that they asked Mr Suwa whether there is any photo album at the Embassy, to know who this Assan was.

PW15 said Rui told them about arms transaction with Assan in respect of a coup plot, adding that was the reason they wanted to know who is this Assan.

"We asked Suwa at the embassy, but he said they don't have any Assan, and then we requested him to bring the photo album at the embassy, and the album was brought by one Malick Jobarteh. We went through the album page by page, and he (Rui) pointed at somebody as Assan. Together with one member of the panel, we looked at the photo and found out that the Assan was Ngorr Secka, former deputy head of mission at the Gambian Embassy in ," he added.

He said this information was sent to his colleagues, back in the , and Ngorr Secka was arrested and detained.

Asked by the DPP, as to where was Ngorr Secka at the time of the investigation in , he replied that Ngorr Secka was then in the .

He said Rui also told them that the person who was moving with Ngorr Secka at the time was identified as Kabirou Saidy (PW3), also working at the Gambian Embassy in as a security officer.

He said Kabirou Saidy was questioned about his trips with Ngorr Secka to the Samaritan Restaurant, and he admitted that he had been accompanying Ngorr Secka on several occasions. PW15 added that statements were obtained from Kabirou Saidy.

At this stage, the hearing was adjourned for continuation today.

Testifying before Justice Amadi, Mrs. Maraneh-Kurang of Gamcel told the court that she is the Director of IT at Gamcel.

According to her, Gamcel received a request from the NIA to make a printout of nine phone numbers. "We made a printout from the client computers attached to the server," she added. She revealed that they have ten computers that make printouts, and all are in good working condition.

"We have our server connected to the switching system and information is collected by the server from the switch," Mrs. Maraneh informed the court.

According to the witness, what is collected from the server are calls made by their subscribers.

On how often Gamcel makes a printout, she said whenever the investigating authorities requested for a printout.

The requested printout was shown to the witness, which she identified in court, and it was marked as an exhibit without any objection from the defence team.

Next to testify was Lamin Drammeh of Comium, who told the court that he is the Technical Manager. He said they received a request from the NIA concerning the call records of three Comuim numbers.

"We printed the printout of calls recorded, as requested by the NIA," he told the court.

Mr. Drammeh further testified that they used a computer, which is in a good working condition, to make the printout.

"We make a printout when we have an official request from the NIA," Mr. Drammeh further informed the court. He identified the Comium printout in court, which was tendered as an exhibit P12 following the application made by the DPP, which was not objected to by the defence team.

This witness was not cross-examined by the defence counsel S M Tambedou and Pap Cheyassin Secka.

In his testimony, Lassana Mark Tunkara of Qcell told the court that he is the Senior Manager Customer Care.

According to Tunkara, Qcell received a request from the NIA to provide a printout of two pre-paid mobile numbers. Asked by the DPP, as to whether he knows the holders of the two mobile phones, he replied in the negative.

"We made the printout as requested, and gave it to the NIA," he stated, and noted that the printouts were from computers in a good working condition.

"The information is fed into the computer when a subscriber makes a call, which is recorded by the server service dropping point."

"We normally make a printout when a subscriber makes a request with a police report for investigation that his mobile is lost or stolen," he added.

After he had recognised the Qcell printout in court, the DPP applied to tender it as an exhibit, marked P22 (Qcell) without any objection from all the defence counsel.

Q- There is some marking, highlighting and colouring on some of these printouts; did you put the highlight there?

A-  I did not put the highlight there.

Q-  Did anybody from Gamcel do it?

Q-  Is call forwarding on Africell the same as that of Gamcel?

Q-  If caller A makes a call to caller B and caller B forwards to number C, what printout would caller A show?

Q-  What does the word default mean?

A-  Means it is a received call.

Q-  It is possible for the printout to show a call to a subscriber who is not in the country?

Q-  It is when a subscriber is roaming?

A-  Yes, a subscriber who is roaming, and subscribes on information.

Q-  Is it possible on a prepaid telephone number?

A-   Minimum is one second and the maximum is 180 seconds.

Q-  That call may be a recording on an answering machine?

Q-   Did you get the consent of your subscriber who holds 9979999 to release the printout in respect of that number?

Q-   Was that subscriber at the time informed by Gamcel that the printout of that number had been released to an investigator?

Q-   It is correct that the holder of that number is post- paid?

Q-   Was there an order from the court or was there an agreement between Gamcel and investigators to give out a printout to them?

Q-  Your company owes confidentiality to all subscribers?

Q-  Apart from the printout, can you record conversations?

Q-  That is a post-paid number?

Q-  Did the subscriber ask to release the said printout to the NIA?

Q-  Did you as a company inform the subscriber that you are going to release the printout?

Q- Take a look at the printout number 3604588 on page 2 where it says outgoing call. Can you explain? 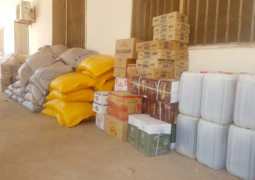