The prosecuting officer, Inspector Touray, recently amended the charge against Hussein Weizani, who was earlier charged mistakenly along with Sheikh Sowe for attempting to commit a felony.

As a result, the latest particulars of offence stated that Sheikh Sowe in the month of September, 2009, by false pretence and with intent to defraud, obtained D101,633 from Hussein Weizani under the pretext that he has a business, knowing the same to be false. 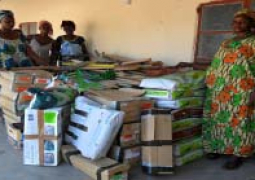 The Abuja Declaration: 12 years on