Continuing his testimony under cross-examination, (PW2), Kemo Ceesay told the Banjul Magistrates’ Court that he was not aware of any malpractices at the GFA.

Asked by the defence counsel whether in 2011 he ever received the FIFA subvention or FIFA financial programme amounting to $400,000, Ceesay told the court that he could not remember receiving such a figure from FIFA.

Counsel further put it to him that the said monies was given to him in two instalments of $150,000 and $250,000 respectively, but Kemo Ceesay insisted that he could not remember the figures.

At that juncture, the defence applied to the court to tender the financial statement of 2009, 2010 and 2011 respectively.

However, the police prosecutor, Sergeant Manga, objected on the grounds that the said financial statements were photocopies, not the originals.

Delivered the ruling, the trial magistrate told the court that he agreed with the prosecution that the said documents were photocopies, and wondered why the originals were not brought to court.

He added that the documents did not meet the statutory requirements to be tendered in court, either as exhibits or for identification purposes.

He noted that the defence earlier made an application for the financial statements to be tendered as defence exhibits.

“I therefore reject the documents to be tendered as defence exhibits,” he said. 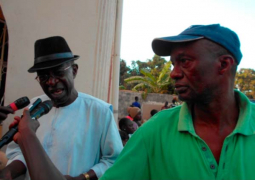