Samba Mballow, the second prosecution witness in the case involving Haddy Jatta, Kabiro Darboe and Momodou Secka, bankers at BSIC bank, who were charged with conspiracy, stealing, fraudulent and false accounting, was on 27 January 2016 cross-examined by lawyer Batchilly before magistrate Wilson of the Kanifing Magistrates’ Court.

When the case was mentioned, Batchilly told the court that he was representing the first accused, Haddy Jatta, and holding brief for lawyer Tambedou for the second accused, Kabiro Darboe.

ASP Fadera stood in for the IGP.

It was put to him that defence exhibit one was not a receipt showing that he paid US$68,969 to BSIC bank, and the witness answered agreed.

Batchilly further asked whether he had any evidence to show that he paid the sum of US$ 68,969 to the bank.

Mr Mballow replied that he was only given a copy of defence exhibit one.

Told that defence exhibit one was not a receipt, he agreed.

Mballow was reminded that he told the court that defence exhibit one was handed to him by the second accused, Kabiro Darboe, and he confirmed this.

He was then asked at what time the second accused gave him the exhibit, and Mballow said it was given to him after 4 p.m.

Asked when he got back to his boss, Abdourahman Jallow, on that day, Mballow told the court that it was after 5 p.m to 6 p.m.

It was put to him that his boss gave evidence in the court and said he received the money from him around 4 p.m. and not 5 p.m. or 6 p.m.

Batchilly then asked which was correct, and Mballow maintained that he gave his boss the money around 5 p.m. and 6 p.m.

It was put to him that in effect he was saying that his boss was not speaking the truth, when he said that he received the money at 4 p.m. However, the witness maintained his previous answer.

Asked whether it was before the 28 October 2013, when he and his boss dealt with BSIC bank, Mballow said they did not.

Asked whether he was literate in English, he said only a little.

Asked him how long he had been working for his boss, Mballow said about 5 years.

It was put to him that under cross-examination of his boss by lawyer Mboge, his boss told the court that the witness was his employee for two years.

Mballow answered that it was more than that.

Batchilly also put it to him that he also said in his evidence that in a meeting upstairs, he said the General Manager told him that he (the witness) paid the US$ 68,969 to the bank, but it could not be found.

Mballow told the court that this was what the manager said.

Asked the name of the General Manager, he said he did not know.

At this juncture, the case was adjourned until 11 February 2016. 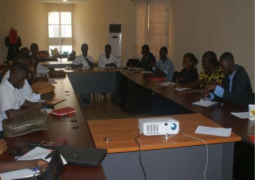