Magistrate Jobarteh was assisted by panelists Cole and Njie.

Lamin Touray, the witness, told the tribunal he lives at Lamin village and is the present manager of AB RENT A CAR.

He adduced that he has been working for the defendant since March 2007 to date, adding that from 2007 to 2009 he was an assistant manager.

Touray posited that he took over on 30 April 2009 as manager, further stating that he knows the plaintiff, Seedy Cham, who sued the company for wrongful termination of his service.

He said the plaintiff worked as a driver, adding that he was a “stubborn” driver.

He narrated that since he took over office, the plaintiff was the first one to challenge him, adding that the plaintiff used to come late to work and would object to his warning, by saying that Mike Waston, the former manager, was not behaving the way the present manager was behaving.

Touray further narrated that the plaintiff would always tell him that he respected Mike Waston but not him, the witness.

At this juncture, he was shown two warning letters, which he identified.

Mr Touray further said they gave the plaintiff two warning letters before they terminated his service, and also a suspension letter was issued to the plaintiff for two weeks without salary.

He testified that the plaintiff was given a written notice for the hearing.

At this juncture, the defendant’s counsel, Salieu Taal, gave the witness the letter for notice of hearing, which he identified.

Touray said the plaintiff came to his office around 1p.m. with a letter stating he would not attend the meeting.

He was again given the letter written by the plaintiff by the defendant’s counsel to identify, which he did.

He adduced that they paid social security for the plaintiff up-to-date.

The defendant’s counsel applied to tender the social security document for 2013 up to date for the plaintiff.

Garba Cham, who was representing the plaintiff, did not raise any objection. The tribunal admitted the document.

Touray testified further that the reason the plaintiff’s service was terminated was because he was coming late to work, and also absenting himself without giving reasons and without taking permission.

In another development, the sedition trial involving Mass Kah, a Foroyaa messenger, could not proceed yesterday before Magistrate Isatou Janneh of the Kanifing Magistrates’ Court because, according to the prosecutor, her witness was not present in court.

She therefore applied for an adjournment.

Her application was granted and the case was adjourned till today.

According to the particulars of offence, the accused, Mass Kah, on 14 November 2013, between 16:00 hrs and 17:00hrs, at Latrikunda German, within the K.M.C. and diverse areas, with willful intention, uttered a statement against the president’s photo which one Lamin Camara was pasting on his vehicle opposite a tailoring workshop, saying: “Why not paste the photo of His Excellency the president on the sky?”, and thereby committed an offence. 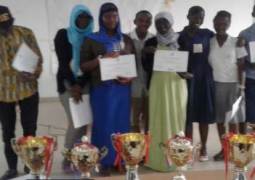