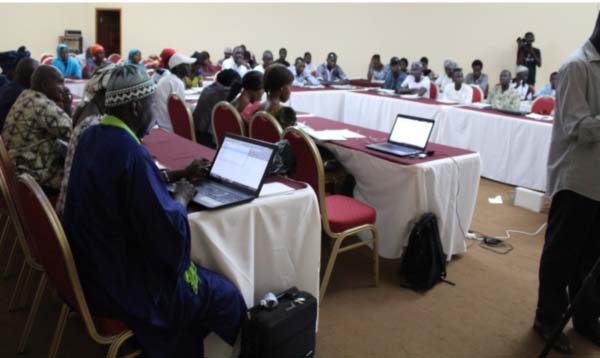 He commended GYIN Gambia as a very active group and reminded participants at the meeting that all efforts should be made to ensure successful implementation of the Creating Opportunities for Rural Youth project (CORY project).

He observed that with IFAD, most of the agricultural projects are directed at the rural communities with the understanding that the working population is growing but the idea of change in the sector’s perception is still an ongoing campaign.

By capitalizing on this innovative idea and taking into account the wishes and desires of many rural young women and men, they have recognised the need to provide a continuous “space” by establishing a platform now known as GYIN International, said Mamadou Edrisa Njie, GYIN-Gambia national coordinator.

According to him, GYIN seeks to develop evidence-based, sustainable, scalable, and cost-effective agribusiness, entrepreneurship, and leadership programmes that seeks to address the root causes of youth unemployment, thus create opportunities for young people and rural youths in particular to engage them in meaningful venture to be self-reliant, thus improve their standard of living.

The project is being delivered by a consortium of organisations internationally, he said, adding that in The Gambia the Village Savings and Credit Associations (VISACA Apex), Gambia Women Finance Association (GAWFA) and Jarumeh Koto Youth Development Association are the implementing partners.

Saikou Jammeh, GYIN-Gambia Board member said the performance of GYIN Gambia as one of the most vibrant network in the sub-region is due to the hardworking passion of its leadership and the commitment of the members.

Lamin AD Sanyang, Project Director, Livestock and Horticulture Development Project (LHDP) IFAD-funded project also Chairperson of IFAD Country Programme Approach (CPA), shared with the meeting that all the four ongoing agricultural projects under the Ministry of Agriculture funded by IFAD are PIWAMP, RFP, LHDP and Nema) putting emphasis on the participation of women and youth in agriculture and its related activities.

Mr Sanyang labelled the youth as the right target in all the dreams in making the agricultural sector a more lucrative business, as well as its expansion and encouraged them to work in teams and share their stories with similar associations in other countries with a clear line of strengthening one goal.

Mr Pape Samba, Project Director CORY project, made it known to all the participants that the CORY Project is designed with $1.95 million funding from IFAD, as well as combination of in-kindand cash support from additional organisations in the amount of US$4.66 million, all amounting to US$6.61 million.

With the project, he said, efforts would focus initially on rural youth and youth-led organisations in Benin, Cameroon, The Gambia and Nigeria.

He commended GYIN-Gambia and the team for its good track records, the Government of The Gambia and partners for their support and collaboration since the inception of the network.

Launching the CORY project in The Gambia, Mr Adama Sabally, Youth Coordinator at Programme and Planning Directorate, Ministry of Youth and Sports, recognised the CORY project as a promoter of youth employment which he said has come to The Gambia at a good time (when more youths are migrating from the rural areas).