The Independent Electoral Commission, the body mandated to conduct elections and election-related issues, embarked on a supplementary registration countrywide from 14 January to 12 March 2016.

Alhaji Mustapha L. Carayol, the commission chairman, said his institution is responsible for all elections in the country and the purpose of the gathering was to update the general public through the media on status of the on-going supplementary voter registration.

“It is fitting to give you an update on the on-going supplementary registration of voters,” he said.

According to IEC chairman, this was necessitated by the fact that after five years when the last general registration of voters was conducted, many Gambians have turned 18 years and/or will be 18 years by the date of the next election, which will be held on 1 December 2016.

Hesaid section 12 (b) of the Elections Act entitles a citizen to have his/her name entered on a register of voters in a constituency if he/she has attained or will on the date of holding the next election attain the age of 18 years.

“It is legal and apt to enfranchise these Gambians to participate in the electoral process,” he added.

He said: “At the launching of the 2016 to 2018 electoral calendar, I did outline the array of electoral activities for this period as follows: Presidential Election on 1 December 2016, National Assembly Election on 6 April 2017 and Local Government Elections 12 April 2018.”

Mr Carayol further stated that IEC is on the course with this electoral calendar, as the supplementary registration of voters started as scheduled, and it is progressing successfully.

The commission had not yet encountered any major issue in the conduct of this national electoral activity, he told journalists.

The commission had recruited 170 registration staff, trained and deployed in the field, and out of these 20 are senior registration officers, 50 supervisors and 100 registering clerks.

He further told journalists that there are 50 teams made up of one supervisor, one registering clerk and one operator.

He also said attestation forms have been printed for this purpose and are being issued free of charge by the registration teams to applicants.

The total provisional number of registered voters at the end of the fourth week is 44, 547 voters; replacement of lost, damaged, mutilated or brunt voter’s cards is also taking place at the registration centres, he said.

He said the replacement of voting cards could be done at any registration centre and a voter who replaces his/her voting card could only vote during elections at the polling centres he/she originally registered.

He said there is a fee of D100 charged for replacing a voting card to minimise the rate at which people lose or damage their voting cards.

He reminded all Gambians that the sole purpose of the voter’s card is for voting at elections and not for any other use and, therefore, appealed to all institutions and organisations to disallow the use of voters cards in their transactions.

“It is illegal to attempt to register more than once, and for those who registered in 2011 must not register again, because there is penalty on double registration with a fine of D25,000 or a prison term of 2 years with being barred from participating in any future electoral activities for not more than 10 years, if convicted.”

Woman, 51, in need of overseas treatment 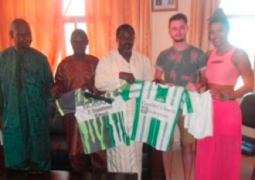