Momodou Lamin Bojang, known as Kabsin, a leading wrestling promoter in the country who was recently suspended for a period of one month and fined D5, 000 by the Gambia Wrestling Federation, has revealed to reporters that he is more ready to push forward and believes in what he is doing.

Kabsin was suspended following his continued staging of wrestling competitions at the Bundung Primary School.

Speaking at a press conference held last Saturday at the Bayba Financial Services Headquarters on Kairaba Avenue, Momodou Lamin Bojang, managing director of Bayba Financial Services, expressed dissatisfaction over the suspension, saying that despite the suspension, he is always willing to help in promoting sport, especially wrestling, which is The Gambia’s traditional game.

Kabsin added that despite the suspension, he would brighten the darkness which is between him and the federation and continue his promotion.

He stated: “I believe in what I am doing and I am ready to push further to promote wrestling to the last dot.’’

He thanked Bayba for promoting wrestling and urged the public to transact with Bayba to ease their promotion in the sports sector. 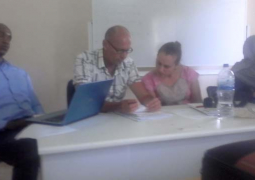