One Ebrima Gagigo, a 21-year-old driver and a native of Jareng village in the Central River Region was recently arraigned before Basse High Court, presided over by Justice S.A. Abi on a single count of manslaughter.

The prosecution alleged that the accused on 16 May 2016 at Jareng Village in the Central River Region, unlawfully caused the death of one Alagie Cham.

The accused pleaded not guilty and the prosecution led by State Counsel L. Jarju opened the case and called three witnesses.

The witness revealed that some moments later, the deceased started complaining of chest and ribs pain.

The second witness, Ebrima Bass, also testified that he became aware of the squabble between the deceased and the accused whilst sitting under a mango tree.

The witness further testified that he left them under the mango tree and he was later called by Mariatou Bass to come and see the condition of the deceased.

The witness said he asked the deceased what went wrong and the deceased told him that he was lifted up and knocked to the accused.

The witness informed the court that he later reported the matter to the police.

The third witness, Abdoulie Boye, a police CID said he recorded the cautionary and voluntary statements of the accused. 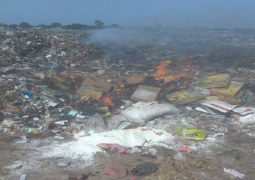