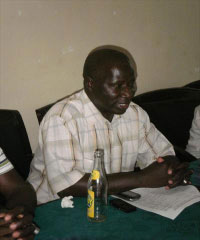 Participants attending the 2012 NGO Week on Tuesday focused their discussion on Human rights and Governance.

The forum, held at the Tango Conference Hall, formed part of the activities showcasing the work of NGOs in The Gambia.

The forum brought together development workers, activists and young people from different walks of life on the theme: “The foundation for good governance and sustainable development lies in the respect, protection and fulfilment of human rights”.

The panelist was Lamin Nyangado, Head of the Policy Department ActionAid International The Gambia, who led a discussion on the linkages between human rights and development with a particular focus on performance, accountability and participation.

“All human beings have the right to live with dignity at all times, regardless of their legal, social or political status,” he says.

He gave a brief history of human rights, noting that human rights activism dates back to the French Revolution of August 1789 and declared that “all men are born and remain free and equal in rights”.

Human rights, he said, are not gifts to be bestowed at the whims and fancies of anyone, nor a privilege, an act of grace or charity.

Mr. Nyangado noted that living with dignity and without fear, adequate decent food, water and health freedom from slavery, fair treatment under the law, shelter among others are the basic human needs.

According to him, these basic human needs and values are at the foundation of universal ideas of human rights.

He asserted that human rights attempts to institutionalize the protection of the weakest as the first and primary objective of formal and non-formal human institutions.

Human rights-based approach (HRBA) to development thus means that control over people’s destiny must be returned to them, he said, adding that it creates a demand system which is firmly rooted in the universal human rights system to enable all, especially the most vulnerable, to access all resources available without discrimination.

However, he indicated that development and human rights are interdependent, but for a long time there has been a gap between the two.

On the evolution of development practice and a failed development model, he noted that for the last three decades, an exclusively economic model (couched by the IFSs mainly the Bank and Fund) as contained in the ‘Washington consensus’, has limited the social, political, civil and cultural dimensions of development.

He stated that the need for developing countries to integrate into the world economy was also emphasised and imposed through several means, noting that the most controversial of which were the Structural Adjustment Programmes (SAPs), and privatisation funded by the IMF and the World Bank.

“Human rights activists respect, protect and fulfil human rights obligations, such as those enshrined in all relevant international instruments including covenants, conventions and declarations as well as commitments made in multilateral forums,” he explained.

In his concluding remarks, Mr. Nyangado reminded the gathering that human rights activists are not just lawyers but development practitioners and communities.

Human rights activism must not be limited to the theory (training and retraining) but be applied in practice and in programmes designed.

For his part, Sheikh Lewis, of the International Society for Human Rights, said that since the 1998 United Nations (UN) Declaration on human rights, human rights defenders are also identified as human rights activists, professionals or monitors.

“There is neither qualification required nor standard profile to quality as regards human rights activism, Mr. Lewis said, adding that human rights defenders are individuals, and group of persons or associations contributing to the effective elimination of violations against individuals and the promotion and protection of people’s basic human rights and freedoms.

Human rights defenders fight for the promotion and protection of civil and political rights as well as the promotion, protection and realization of individuals’ social, economic and cultural rights, Mr. Lewis added.

Knowledge of national, regional and international human rights instruments are the criteria to be a good defender.

“It is time the world realised that international affairs must be governed by the rule of law, not of war,” he said, adding that the only way to enforce law peacefully is to make it applicable to individuals.