Holy Family Band, a group of talented Gambian band players, will stage a mega musical festival on 24June 2011 at Jakarolo with many rising Gambian artistes to perform with live powered by the Holy Family Band.

Many Gambian artistes are expected to perform with live band including the veteran Gambian Kora maestro Jaliba Kuyateh, and Jali Kebba and young artists such as Jalimanding, Jalex, Tashman, poetic X, ENC, New school, brokey, and others.

Humanity Band and Modou Kara Gaye will all be perfoming at the show.

This information was disclosed to Point Entertainment by Tijan Jabang, alias ‘Tashman’, a rising Gambian artiste of the Holy Family Band who first traded with ‘Da Fugitives Crew’, during a short chat with Entertainment at his Pipeline Residence recently.

Youki and Africell are the main sponsors of the event, according to the organizers.

He said: “Music is taking a new trend in the world whereby live performance is considered greatly, as an artiste, and that is what people and fans recommend. Musicians have to be good performers. What can develop Gambian artistes and music industry is taking up an instrument.”

Taskman, as his musical name, is of the view that the show is basically to promote live performance in The Gambia among musicians, saying that many artistes have learnt live performance through Holy Family Band.

“We want to spread the talent to all Gambian artistes through instruments to take music to another level and to notch the vibes through the passage of time. We have invited some personalities that will attend.” Tashman, who is also on the verge of releasing his album, told Point Entertainment.

He said 15 Gambian artistes will be performing live and gate fee is only D50, adding that the show is not out to make money but to develop fresh Gambian talents.

Great people do great things, Tashman says, adding that his music preaches nonviolence, no to drug and corruption.

“At Holy Family Band, we have six to seven instrumentalists, drummers, artistes and backing vocalists, as well as the management,” he said, adding Holy Family Band’s aim is to take Gambian music to higher heights. 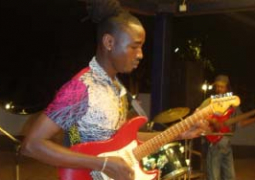