Justice E.A. Amadi of the high court recently entered judgment in favour of one Yoba Jawo and Momodou Jallow (commonly known as Drammeh Jallow), in a land dispute case.

The plaintiffs declared that they and members of their family are the owners, and were entitled to the possession of the suit lands situated at Sare Nyanga otherwise known as Mbolbuk village in the Central River Region of The Gambia.

The plaintiffs also asked for an injunction restraining the defendant and whosoever from entering, farming, letting, building on, remaining or doing anything in, with or about the said suit lands that is inimical to or inconsistent with the plaintiffs’ right or interest.

Damages and costs were also claimed by the plaintiffs.

In his judgment, Justice Amadi told the court that after going through the pleading and evidence, he was satisfied that the plaintiffs’ root of title, namely inheritance, has been proven.

He stated that the plaintiffs traced the history of the land to their father, late Tombong Jawo, who was the first grantee of the forest lands by the original owner, Ja Jawo, the alkalo at the time.

He further stated that there was no broken chain in the line of succession, and that the land devolved on the plaintiffs and other members of the family of Tombong Jawo.

He added that a higher authority in the district, the district chief, Alhagie Malick Ndow, decided in favour of the plaintiffs when he ruled that the suit lands belonged to them, adding that this was in evidence.

“The plaintiffs have clearly shown a real cause of action. Having held earlier that they have proved their claim to the ownership of the suit lands, it follows that the defendant’s entry into the plaintiffs’ said farm-lands without their consent is unlawful,” Justice Amadi declared.

He further declared that the plaintiffs and members of their family are the owners of and entitled to the possession of the suit lands situated at Sarre Nyanga in the Central River Region of The Gambia.

He ordered that the defendant be ejected forthwith from the suit lands.

He also granted an order of permanent injunction restraining the defendant by himself, his servants, agents and privies from further entering into, farming on, letting, building on, with or about doing anything in, that is inimical to or inconsistent with the plaintiffs’ right or interest.

Justice Amadi subsequently awarded the sum of D200,000 as damages for trespass in favour of the plaintiffs against the defendant.

He finally stated that the plaintiffs were entitled to the sum of D100,000 as costs for the action. 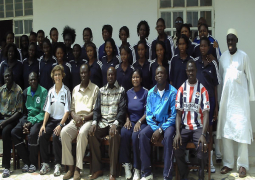