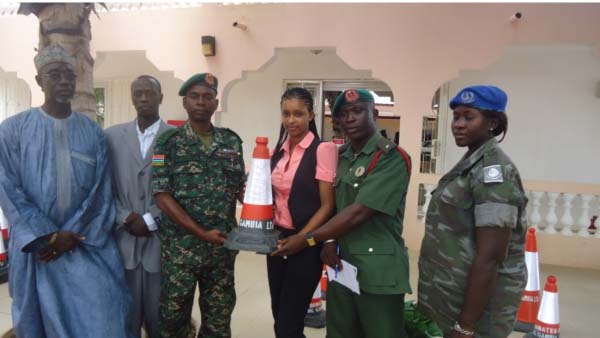 HG-Gambia Limited, a private institution engaged in the sales of fire and safety equipment, health, safety and security products, as well as furniture, Monday presented traffic cones worth of D350,000 to the Gambia Police Force and the Gambia Armed Forces.

Sixty-eight cones were given to the police while eight cones went to the Armed Forces with the motor: “protect, prevent and secure.”

Monday’s ceremony marked the institution’s second donation held since its inception in the country, all geared towards the safety and security of lives and property.

The presentation ceremony held at the HG-Gambia’s office, Bertil Herding Highway in Kotu, was graced by members of the security services, the management of the institution and their staff.

In a brief interview with reporters, CEO/proprietor of HG-Gambia, Limited, Habib L. B. Gitteh, said the institution was established between 1999 and 2000 starting with furniture.

He said they started with fire and safety in 2001 up to date and further revealed that they have been a fire, safety and security company with almost 14 years of experience in the country.

He said they deemed it significant to give back to the community.

He added that they are determined to ensure the protection of the people, and deemed it significant to donate the equipment to the security services.

He said the security apparatus are also out to ensure the safety of lives and valuable properties, adding that HG-Gambia’s contribution to protection and security was in line with the security service mandate.

Receiving the donation on behalf of the Chief of Defence Staff, Lieutenant Colonel Samba Baldeh, director of training and doctoring, thanked HG-Gambia chief executive officer for the gesture.

He described the significance of the cones for traffic control as geared towards minimizing traffic accidents.

He revealed that HG-Gambia had been working with the Gambia Armed Forces for a long time as they usually provide fire safety equipment and fire extinguishers for the Armed Forces as well as the service of the equipment when needed.

He said the cones would go a long way in helping them in the execution of their duties, adding that they do have check points during night duties and they also have a joint operation with the police.

Deputy Inspector of Police, Ousman Gibba also extended gratitude to the donors and sent a message to the drivers that cones are not a decoration on the road but meant to alert drivers and they should not ignore them.

Wherever they find a cone, they should know it signifies something, he said.

He further described HG-Gambia’s step on for the safety of lives, adding that once there is presence of a cone and that the driver is alert, precautions should be taken for life safety.

He however revealed that they have registered a number of accidents in which a number of their officers were knocked down on the road.

He further advised drivers to pay heed to the presence of the cones.

He further urged other businessmen to emulate HG-Gambia gesture.