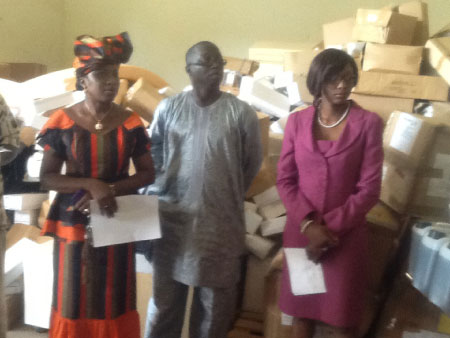 Ram Faal, a Gambia philanthropist based in Finland, recently donated a 40-foot container of medical items at a presentation ceremony held at the Central Medical Stores in Kotu.

Speaking at the handing over ceremony, Fatim Badjie, Minister of Health and Social Welfare, expressed happiness for the gesture noting that it is a pleasure to have a man like Ram Faal.

According to her, the cost of the shipment for the container to The Gambia was funded by President Yahya Jammeh.

Noting that her Ministry is in need of the donated materials, Health Minister Badjie assured the donor that the materials will be put into good use. She also encouraged other Gambians to emulate Faal’s gesture.

Modou Ceesay, the father of the donor, explained that his son is doing this because of the love he has for The Gambia, its people and President Jammeh in particular.

Noting that his son is donating to the Health Ministry as part of his contribution to the development of the country, Ceesay commended President Jammeh for his visionary leadership and love for Gambia and Gambians.

Also speaking at the handing over ceremony was Omar Sey, deputy permanent secretary at the Ministry of Health, who said this was not the first time the donor had done such, noting that over the years, Faal has donated to various hospitals in the country.

The ceremony was chaired by Modou Njai, director of Health Promotion.