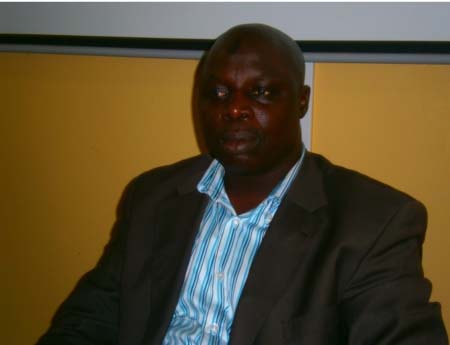 Modou Njai, the director of health promotion and education unit under the Ministry of Health and Social Welfare, has revealed plans and level of preparedness in terms of effective response to the Ebola prevention and control.

He noted that with the close collaboration and support from UN system through WHO, his office is targeting to sensitize eight hundred and seventy-four village heads and  forty-eight chiefs across the country on Ebola prevention and control.

According to him, the directorate of health promotion and education unit is also targeting to orients three hundred and fifty Red Cross members on Ebola prevention and control, as well as target a massive distribution of posters to various schools and communities across the country.

Mr Njai was delivering his speech during an orientation of media personnel on Ebola Control and prevention held at Nana Conference hall on Wednesday.

The forum attended by both the print and electronic media was organised by the Directorate of Health Promotion and Education Unit under the Ministry of Health and Social Welfare aimed at updating the media on communication strategies and social mobilization on Ebola, as well as update on Ebola surveillance.

The orientation forum also aimed at updating the media on the ministry’s readiness and plan of action they would be embarking in terms of sensitization to the masses regarding the control and prevention of Ebola in the sub-region.

He said the aim was to ensure the right information was given to the people to effectively respond to the Ebola control and prevention in the event of any emergency occurrence.

He noted that with the support of the UN System through WHO office there would be lot of   sensitization regarding the prevention and control of Ebola.

He added that despite a good surveillance already in place, yet still a lot needed to be done through collective effort and collaboration with the UN  system, particularly the WHO are  very supportive to the Ministry of Health and Social Welfare.

Mr Njai said the ministry of health are very much conscious of what is happening in the sub-region.

“We are following events and based on that the ministry of health has not been sitting running day-to-day to see that we get public information and also make sure that we get the right information to be taken to the people at the right time,” said Mr Njai.

He said based on that his health directorate unit has been working with their media partners to make sure the message goes to the right people at the right time on the prevention of Ebola in case of any emergency should occur.

He thanked the media for playing a very crucial role in the dissemination of information regarding Ebola disease in the sub-region, adding that both the print and electronic media had played very significant role in providing the right information to the people in knowing what Ebola is all about and how they would be able to prevent themselves from the disease and know the sign and symptoms when they come across it.

He disclosed that health directorate unit with the support of the UN system would be conducting series of training for health workers on crises of  communication  management, public awareness  on communication skills, as well as how to address the issues of rumours on Ebola control.

He also stated that 875 villages across the country would also be sensitized on Ebola and the process would start from 16 June 2014.

He advised the media to give the right information to the people at the right time and be reporting accurately on what Ebola is all about and its negative impacts on the society.