Halifa Sallah the Secretary-General of the opposition Peoples Democratic Organisation for Independence and Socialism (PDOIS) has responded to the call made by the Chairman of the Independent Electoral Commission for opposition parties to contribute in funding the electoral process.

"The opposition is not a tax collector, and do not manage a national budget," he pointed out.

IEC boss Mustapha Carayol told The Point newspaper in a recent interview that the Commission needs over US$3m to ensure the successful holding of the 2011-2013 presidential, parliamentary and local government elections.

Mr. Carayol told The Point that the government cannot do it alone, and stressed that even the opposition should come in and support the Commission to mobilise funds.

According to Halifa Sallah, the fact that the IEC boss is speaking to the media about its weaknesses, strength and concerns is a healthy sign, as it is very rare for such to happen.

He noted that even though the IEC Chairman has raised highly polemical issues, it is not the time to engage them on that score but rather to encourage them "to be more vocal on what will enable us have a relatively credible election."

"I would like the public to know that the opposition is not a tax collector, and does not manage a national budget. The constitution has provided the basis for the Independent Electoral Commission to derive funds from the government revenue," he noted.

He further stated that Section 44 of the Gambian constitution states that "the Independent Electoral Commission shall submit its annual estimates of expenditure to the President for presentation to the National Assembly without amendment, but may attach to them his or her comments and observations."

"Three million Dollars is less than 90 million Dalasi. This could easily be funded from the national budget," Mr. Sallah added.

Further reacting to the IEC's boss call on political parties not to wait until the last minute to get to the grassroots, the PDOIS leader said, it is very clear that 2011 election is going to be different, noting that all active political parties are already on the ground.

For him, "the advice is good and the criticism is also not misplaced," but stated that his party will not be found wanting in working with the grassroots to promote the selection of one opposition candidate for the 2011 Presidential Elections.

This, Halifa added, "could give the country a new start by putting an end to the politics of patronage, and build the culture of the sovereignty of the people." 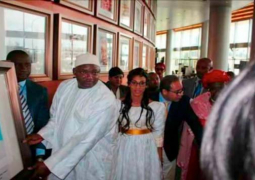