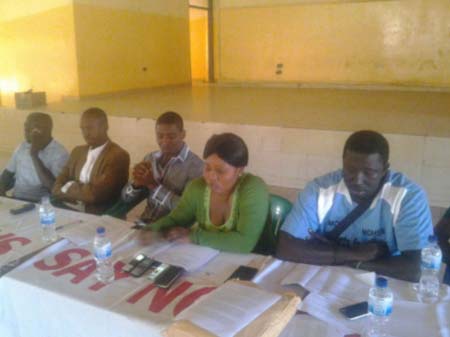 The Gambia Volleyball Federation on Sunday held its Annual General Meeting (AGM) at the B.O. Semega Hall in Serrekunda East.

It was the first AGM held under the Yunusa Barry-led executive.

The congress delegates unanimously adopted both the financial and activity reports and also adopted the 2016 Gambia Volleyball Federation action plans.

Speaking at the meeting, president Barry highlighted some of the activities recorded by his federation, notably the implementation of the African Dream Project in December 2014.

The Gambia hosted two international coaching courses in 2015, Level I and II, with the latter being the first time in the country.

An Award was also conferred on the GVBF by the Confederation of African Volleyball as a role model National Federation in Africa, giving the Federation an international recognition to the extent that three executive members were elected into Zone Volleyball Commission.

President Barry was elected 1st Vice President, Bai Dodou Jallow into the referees’ commission and on April 8 Yunusa Barry was appointed a commission member of the CAVB development commission.

The famous African Dream Project was also launched in the Gambia. The programme aims at having a common project mainly focusing on volleyball at school.

Four centers were set up to develop and identify athletes at young age and arranging all the keys for their involvement later on to their corresponding Youth national teams.

The Gambia has participated in record 9 international events, winning 2 gold medals, 3 silvers, 2 bronze medals and the country also qualified for the All African Games indoor volleyball for the first time.

The Executive Director of National Sports Council, Marcel Mendy, also commended the Federation for holding the AGM, so as to report back to the stakeholders.

Mendy reminded the Volleyball Federation to be ready to work closely with the clubs.