The Gambia Volleyball Association (GVBA) has set Saturday June 12th 2010 for the start of the 2010 National Volleyball League, which was delayed due to the team's failure to register.

According to Musa Casa Taal, the President of the Gambia Volleyball Association (GVBA), the opening game of the league will be played in an exhibition match for both male and female categories. This means that players will be selected from all teams and will be divided in two teams for both male and female teams to play against each other at the .

He also urged all teams to come with their jerseys during the grand opening game of the league.

Noting that the league proper would start on Wednesday 16th June 2010, he said all matches would be played in a rotational form, from to Brikama, as agreed during a technical meeting on Monday 24th May.

According to Casa, his association is soliciting the support of companies to become the sole sponsors of the 2009/10 National Volleyball League Season.

The Gambia Armed Forces registered a male team, while Bakau Volleyball team is also expected to register for the national volleyball league season. 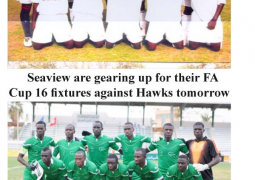 Bag of Rice will reach D1, 250- ActionAid The Gambia Director