Gunjur United opened the scores through midfielder Salifu Bapa Bojang aka Aaron Ramsey in the 5th minute of the game before Sanchaba Sulay Jobe Football Academy, after the interval.

Ebrima Janneh grabbed the winner for Gunjur United mid-away into the second half.

Gunjur United are three points behind league leaders Fortune FC with 26 points in thirteen league matches with a game in hand against Jambanjelly United.

It's so Easy to Save Lives! 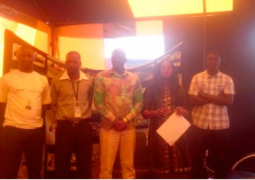