The community of Gunjur in the West Coast Region on 13January 2013 witnessed the inauguration of the newly constructed market for the community.

In his inaugural speech, Alkalo Alhagie Sulayman Touray thanked Marlborough Brandt Group for funding the construction of the market.

Touray applauded the village development committee (VDC) for their contribution towards the development of the village, saying the new market would help vendors to sell their goods in a conductive environment.

The Nyasinba of Gunjur, Aja Mai Kebbeh, commended the visiting UK Member of Parliament, Claire Perry and her daughter for visiting Gunjur and witnessing the event.

Mrs Kebbeh noted that it was not easy for them to acquire the land, and seized the opportunity to thank Darboe Kabilo for providing them the land.

She hailed Marlborough Brandt Group for funding the project, saying few years ago when she visited the market she found women vendors working under heavy rain during the raining season as well as sitting under the hot sun.

“Marlborough Brandt Group has been supportive of the people of Gunjur since the inception of the link 30 years ago, and the newly constructed market would really aid vendors to sell their items in a conductive environment,” she added.

The Chairman of Gunjur VDC, Demba Jobe Touray, thanked MP Claire Perry and her daughter for witnessing the inauguration ceremony of the newly constructed market funded by Marlborough Brandt Group in the UK.

Jobe Touray revealed that the construction of the new market came when Dr Nick Morris visited Gunjur last year and saw vendors selling their items under heavy rain and hot sun and he decided to call an emergency meeting with village elders and the VDC, which led to MBG deciding to sponsor the market project.

He said they also received D750,000 from the Community Development Fund and some cash from Marlborough Brandt Group for the construction of the market.

Jobe Touray also thanked former chief of Kombo South Alhagie Ajeh for giving his tractor to the VDC during the construction of the market. He also thanked all those who have contributed towards the success of the project.

For his part, the Secretary General of Gunjur Link Committee, Mankamang Touray, said the gathering was an important milestone in the history of the link between Gunjur and the people of Marlborough in the UK which was founded in 1982.

He applauded the link for providing many development projects to the community of Gunjur. 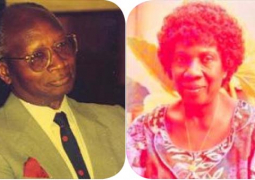