One Lamin Darboe of Gunjur village was on Tuesday arraigned before Brikama Magistrates' Court, presided over by Magistrate Pa Harry Jammeh, for illegal felling down of  trees contrary to the Forestry Act.

According to the particulars of the offence on or about the 5th May 2009 at the accused unlawfully cut down three palm trees without authority or permit from the Forestry authorities.

When the charge was read to him, he pleaded not guilty.

The accused person was granted bail in the sum of D5, 000 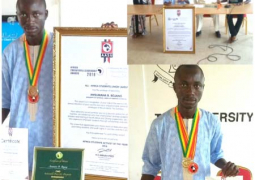