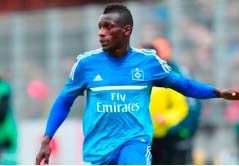 When he first trained with Hamburg aged just 17-years-old and fresh off the back of a 6,000 kilometre journey to safety across the Sahara and the Mediterranean, Gambian refugee Bakary Jatta had never seen snow before.

The teenager hailed from a country whose lowest average temperature was 24 degrees celsius, but was playing alongside men in minus seven degrees and still did enough to impress then HSV boss Bruno Labbadia.

“The boy can kick,” the coach claimed before signing him to the club’s Under-21 side.

“I have a lot of respect because of his story,” Labbadia told reporters.

It is impressive that he had the courage to do something like this.”

Before signing for Hamburg, Jatta had never played for a club before.

He used to play outside his house in the Gambia, but fled for his life under the cruel regime of dictator Yahya Jammeh, who suppressed the media, outlawed homosexuality and claimed he would “cut off the head” of any gay person, as well as claiming he could cure HIV/Aids through natural herbs.

Jatta left his home country for a better life, and after a perilious trek across desert and sea, arrived in Germany with only a small bag of belongings, settling in Bremen. His athletic prowess was noticed at the Lother Kannenberg Academy, a centre for disadvantaged teenagers founded by an ex-alcoholic boxer.

After unsuccessful negotiations by academy advisor Efe Aktas with nearby Werder Bremen, who only offered a preliminary deal, Jatta visited Hamburg hoping for a permanent contract to help secure his residency in Germany. His lack of experience mattered little as he quickly settled into the U21 squad, scoring twice on his debut.

In 15 games, he scored 14 times and assisted three more goals for the U21 side, doing enough to make the step up to the senior team and become the first refugee to play in the Bundesliga when he made his Hamburg debut on April 16 against Werder Bremen.

A week after his 18th birthday, he signed a three-year contract with Hamburg, and followed that up by securing a deal with German sports manufacturer Adidas, giving him security in his new home as his residency permit was extended until 2019.

Jatta does not like to talk about his past, preferring to look to the future, and is enjoying learning German and settling into his new home.

“I grew up without parents, the conditions were very bad for me in Africa,” he told Hamburg’s official website.

“I knew I had to take this difficult and dangerous way of escape if I had the chance to have a future. For this I have taken many dangers upon myself. It was a difficult time, but now I just want to look ahead.”

After securing his sponsorship deal with Adidas, Jatta provided a local Gambian refugee side in Bremen with new jerseys and balls. Although he is now determined to become a German, he has not forgotten his roots.

The teenager claims Neymar is his “idol”, and showed similar characteristics to the Brazilian when deployed on the wing towards the end of the 2016-17 season as Hamburg battled relegation under manager Markus Gisdol.

Jatta ended the season with six appearances for the senior side, and is aiming for a more important role next year. There has been speculation of a loan move to gain first team experience, but the 18-year-old is happy to fight for his place in the team.

“As of today, there is no need for talks on a loan,” Aktas told Goal.

Fighting is what Jatta has done all his life. He has overcome every obstacle. There will be no need for a loan because this is another battle he is likely to win. Goal.com 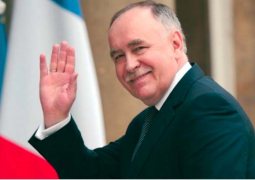