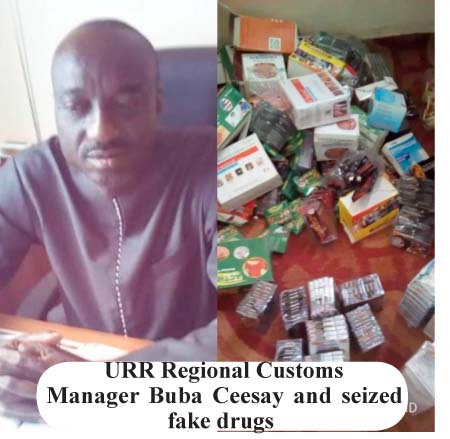 Customs officers in Basse and other sister security personnel at Naymanar border post have arrested a 45-year-old Guinean national while trying to smuggle some dozens of fake drugs into The Gambia.

Upper River Region Customs Manager Buba Ceesay confirmed the arrest of Fatoumatta Lamarana Jallow, saying she is presently in custody helping them in their investigations.

He said regional customs officers and medical control agencies mounted a massive screening on vehicles coming from Guinea and caught the culprit with the fake drugs when her bag was screened.

“Her arrest demonstrates the strong collaboration between regional security personnel to ensure that criminals are brought before the law,” Mr Ceesay said.

Regional health director and head of medicine inspection, Lamin Ceesay said the lady’s smuggling of drugs into The Gambia was illegal because she is not licensed to import medicines into the country under the provision of medicine laws.

He said after the final investigation and inventory, custom officers will hand over Madam Jallow to the police.

She commended border security personnel for their strong collaboration and called on the ECOWAS Commission responsible for drugs to help fully communicate to all West African states in tackling drug trafficking within the continent.