International Women’s Day celebration is an occasion meant to review how far women have come in their struggle for equality, peace and development.

It is also an opportunity for women to unite, network and mobilize for meaningful change.

Speaking at the ceremony, Adama Sowe, of the Status of Women Committee Gambia Teacher’s Union Region Two, said this year’s theme for International Women’s Day is: ‘make it happen’.

She added that the GTU’s Status of Women Committee in observance of the day is looking at violence generally and particularly in and outside schools and institutions.

They want this violence to stop, she added, and they believe that dialogue could eventually make it stop.

Tida Jaiteh-Willan, national chairperson GTU’s Status of Women Committee, in her remarks called for the abolition of corporal punishment in schools.

Mrs Jaiteh-Willan also called for people to stop violence against girls in schools, and for students to be disciplined at all times, as well as to be determined.

Female teachers should be seen as role models, she pointed out, as they are working extremely hard.

She further called on students to stop labeling their teachers, and that they should solve problems through dialogue.

Muhammed S. Bah, of the GTU secretarial staff and focal point for madrassas, said discipline is not only about behavior but also attitude, and that women are important tools for peace making.

Alieu Saine of Region Two, the regional chairman, said everyone could make it happen.

“Be educated if you want to be comfortable in life,” he said.

Mr Saine also gave background information on the Gambia Teacher’s Union, its achievements and so on.

Momodou Mboob, a teacher at Sanchaba Lower Basic School, in his vote of thanks said there are a lot of opportunities for women and, therefore, called on them to make best use of them.

He thanked the GTU women’s wing for the educative session, and called on the students to practice the knowledge in school and society.

Education is the only way to eradicate poverty, he added, and called on girl students to “make their books their boyfriends.” 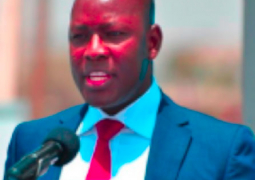