In his message at the meeting for 2012, the general manager of the GTUCCU, Baboucar O. Joof, congratulated the members for attending the meeting in large numbers.

He noted that staff of the GTUCCU would remain committed to improving members’ socio-economic status through provision of relevant micro-finance and micro insurance products tailor-made to suit their members.

“Since the previous AGM, significant effort has been directed towards developing both the consumer cooperative unit and the healthcare and insurance scheme and all is ready now for take-off,” he said.

He added: “We are making genuine effort to secure state land for onward distribution to our members and recently, we found partners ready to build affordable housing with some renowned multinationals providing finance,” he revealed.

According to Mr Joof, during the year under review, they were compelled to request the salary payment function from the Government of The Gambia after tumbling on policy that targeted removing the current system which takes pay masters round schools to pay.

“We are currently engaging the Permanent Secretary at the MoBSE and the directorate of National Treasury to find the best fit to allow us as a non-state actor to carry out payment of salaries of education sector staff, which by all indication will adds value to not only the above trio, but also to the members and Government.”

In his statement, the registrar of the cooperative, Saikou Danso, highlighted the important of the AGM as the only forum where all stakeholders meet and share equal right to participate in discussion about their union.

The registrar advised members to understand the contents of the report and adequately interpret them in order to seek clarification when necessary.

He asserted that government created an environment for developing cooperative organization alongside other micro-finance institution at all levels, particularly the grassroots, to enhance socio-economic advancement.

He said credit union formed an integral part of the micro-finance sub-sector of The Gambia, contributing immensely to poverty reduction and the creation of increased access to financial services by low-income earners.

He said that limited access to finance lowers social welfare and hinders poverty reduction efforts, and the emergency of credit unions is widely recognised as one of the fundamental tools in the fight against poverty as it can empower the poor in improving their livelihood.

He said the micro-finance players need an appropriate legal and policy framework for an orderly growth and development of the sub-sector. 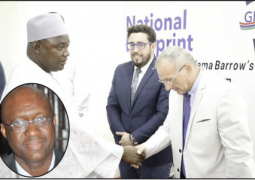